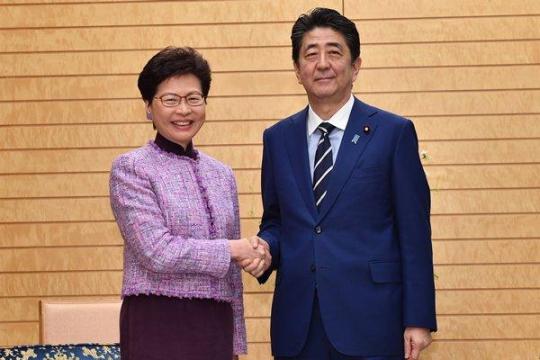 Lam spoke at a symposium in Tokyo on the Greater Bay Area.

In her speech at the symposium, Lam said she considers the Bay Area a new engine to propel the close ties between Hong Kong and Japan and called on Japanese companies to leverage Hong Kong's position to take advantage of business opportunities in the Bay Area.

The symposium promoting the Greater Bay Area is the first such joint overseas effort by the governments of Guangdong province and the Hong Kong and Macao special administrative regions since the release of the blueprint for the Bay Area in mid-February.

The symposium was attended by over 1,000 business executives and leaders from various sectors. Many hoped to see high-ranking officials from Guangdong, Hong Kong and Macao elaborate on the plans for the Greater Bay Area.

The Bay Area has aroused the interest of many Japanese companies, including Line Corp, an emerging technology company. Line Executive Officer Shinichiro Murayama said the Bay Area is "full of resources" and has a strong business model, technology and talent.

Some established enterprises, such as Japan-based multinational electronics giant Panasonic, already have a foothold in the Bay Area. The electronics manufacturer has offices in six cities, including Hong Kong, in the 11-city cluster.

Panasonic officials, in a written reply to China Daily, called the Bay Area one of the most economic vibrant and open areas in China. The area will offer unprecedented opportunities for Panasonic, and the company stands ready to participate and contribute in the development of the Bay Area, the company said.

The Bay Area covers nine cities in Guangdong province - Guangzhou, Shenzhen, Zhuhai, Foshan, Huizhou, Dongguan, Zhongshan, Jiangmen and Zhaoqing - as well as Hong Kong and Macao. The area, spanning 56,000 square kilometers, has a population of 71 million and had a gross domestic product of $1.6 trillion at the end of 2018, equivalent to 12 percent of the country's GDP.

After the symposium, Lam met with Japanese Prime Minister Shinzo Abe. Both expressed their hope to strengthen business ties.

Lam said she shared that aspiration, adding that both places can further enhance cooperation, particularly in elderly care services, in order to respond to the challenge of aging populations - an important issue in both places.

Japan is Hong Kong's fourth-largest merchandise trading partner and Hong Kong is Japan's eighth largest, according to the Trade and Industry Department of the Hong Kong SAR. About 1,400 Japanese companies operate in Hong Kong, and 47 percent of them have regional headquarters or regional offices in the city, the department said.

Abe said Lam came to Tokyo at a great time because the cherry blossoms are still in full bloom, and he hoped that more people from Hong Kong will visit Japan, which he said is "having many international events this year".