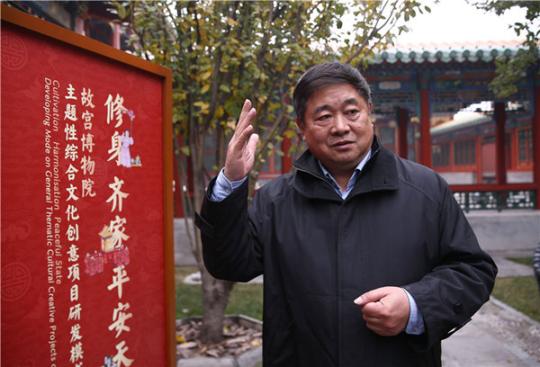 Shan Jixiang, director of the Palace Museum, on Nov. 14, 2018. (Photo by Zou Hong/Asianewsphoto)

The head of one of the world's best-known museums is retiring, and as the news spread late Monday, netizens praised him as a tireless guardian and promoter of the nation's heritage.

The retirement of Palace Museum Director Shan Jixiang, 65, whose name has frequently been in the news, was announced on Monday at a meeting at the museum, also known as the Forbidden City.

Shan "has made the Forbidden City shift from a luxury beyond reach to one that is accessible to ordinary people", Feng Kaitai, a lawyer and Weibo user, posted on Monday. "He makes more younger people fall in love with the Forbidden City."

The museum named Wang Xudong, director of Dunhuang Academy in Gansu province since 2014, as Shan's successor. The academy manages and studies the Mogao Caves in Dunhuang, also known as the Caves of the Thousand Buddhas, including hundreds of temples at a Silk Road crossroads.

In 2012, Shan took the helm of one of the world's premiere museums. As China's imperial palace from 1420 to 1911, the museum welcomes millions of visitors each year - more than 17.5 million in 2018, among the most of any museum in the world.

Shan became director when the museum was beset by controversies, including a crowding problem, a burglary and a case of someone damaging its exhibits.

He is often credited with taking creative measures to turn things around. To control the crowds, he set a cap of 80,000 daily visitors, and he improved the security of the museum and its exhibits.

Shan also has been known for helping the public see more of the museum and its treasures. He expanded the area accessible to the public from 30 percent in 2012 to 80 percent today.

The museum is guardian of more than 1.86 million cultural relics, according to a detailed inventory finished during Shan's tenure. That accounts for 42 percent of country's total number of "registered national-level precious cultural relics".

But while less than 1 percent of the treasures was exhibited in 2012, that number was expanded by 5 percent last year, and plans are for 8 percent to be available for viewing by the end of this year.

While many of Shan's predecessors shunned the limelight, Shan did not. He gave hundreds lectures across the nation on the museum and collected more than $100 million in donations to support its development and restoration of relics, he said.

He helped promote documentaries and shows featuring the museum and oversaw development of more than 11,000 kinds of cultural souvenirs that had annual sales of over 1.5 billion yuan ($223 million), as well as digital apps and video games.

Criticism of Shan was sparse, though some grumbled that the light show at the museum for the Lantern Festival was a little on the flamboyant side.

Both the Palace Museum and Mogao Caves were listed as UNESCO World Heritage sites in 1987, among the first in China.