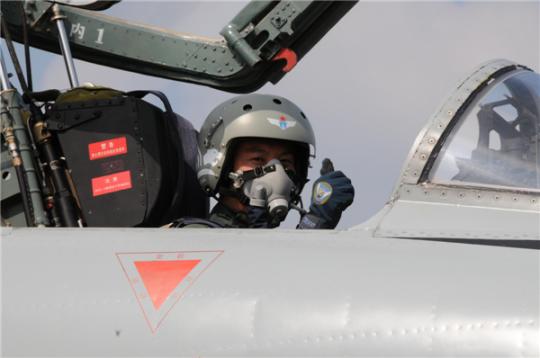 Pilot on a JH-7A fighter-bomber get prepared to take off during the Peace Mission-2013 China-Russia joint military drill in Chelyabinsk, Russia, Aug 6, 2013. (Photo/Xinhua)

Graduates from junior high schools in the economically thriving province of Guangdong normally have two options for their future: They can either continue their studies at a senior high school or go into vocational training.

But there's another choice. They can try their luck with the People's Liberation Army Navy to see if they have what it takes to become a naval aviator and land on aircraft carriers.

An announcement by the Affiliated High School of South China Normal University in Guangzhou, Guangdong province, said the school has begun to work with the Navy to set up an experimental teen aviator program that selects and trains candidates to fly. It calls on students in the third grade of junior high school in the province to apply for the program.

Approved by the Navy, the Ministry of Education and the provincial education department, the program aims to attract students who are interested in aviation and are fit for military flight. The idea is to establish a talent pool for the Navy's shipborne aviation units, the announcement said.

It's the first time the Navy has launched such a program in Guangdong. In addition to the Guangzhou school, another four high schools in Heilongjiang, Anhui, Shaanxi and Sichuan provinces have been selected to take part in the program this year. Before the five new partners, the Navy had nine cooperating high schools in nine provincial-level regions, according to the flight student recruitment office.

Before the teen program, which was launched in 2015, all candidates selected by the Navy for its naval aviation force were graduates of senior high school.

According to the Navy, applicants for this year's teen aviator program should be born between Sept 1, 2002, and Aug 31, 2005; have a height between 160 and 180 centimeters; and be neither too thin nor overweight.

Candidates must be free of diseases such as meningitis or nephritis, and blood pressure and vision must meet the Navy's standards for its pilots.

Other criteria include clean political, legal and study records, consent from legal guardians, a strong mind, mental and physical agility, a good sense of direction and a certain level of proficiency in English.

In each province involved in the program, qualified applicants will take exams addressing overall capabilities around the end of this month. A short list of 250 candidates will then take part in a series of tests of physical, academic and psychological abilities. Fifty candidates will be enrolled in the program at each of the 14 cooperating schools, the recruitment office said.

During the three-year program, students will be given lectures and training on naval and flight knowledge and will be managed like military cadets.

After three years, those who pass the tests will be admitted to naval aviation academies or some of China's top universities that collaborate with the Navy for pilot training.

An experienced naval pilot who flies a J-15 fighter jet based on the Navy's CNS Liaoning aircraft carrier said on Monday that he expects future aviators to have good capabilities in science and technology and the ability to handle rapidly changing situations and make quick decisions, because such abilities are essential in aerial combat.