One of 3 weekend fires extinguished 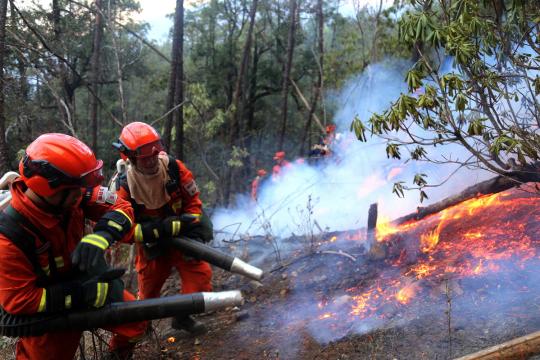 Firefighters work to put out a blaze in Mianning, Sichuan Province, on Monday. About 490 people and a helicopter were dispatched to battle the fire, which broke out on Sunday. (ZHU BINGNIAN/FOR CHINA DAILY)

One of the three forest fires that have been sweeping through mountains in Sichuan province was extinguished on Monday morning, after hundreds of firefighters and helicopters had battled it since Sunday.

Around 350 people had been dispatched to Yuexi county to fight the fire. No open flames could be found as of 8 am on Monday, according to the Ministry of Emergency Management's fire and rescue bureau. No injuries were reported.

The fire scorched 2.7 hectares before it was put out. Firefighters have begun clearing remaining hot spots, the bureau said.

Two other fires continued in Muli and Mianning counties of Liangshan Yi autonomous prefecture on Monday, according to the prefectural government.

A forest fire that led to 31 deaths, including 27 firefighters in Muli county on March 31, reignited because of strong winds around 5 pm on Saturday.

As of Monday at 10 am, three helicopters had been sent for fire detection and extinguishing work and more than 1,000 ground workers, including firefighters and local residents, were dispatched to the site.

In Mianning county, 490 people and a helicopter were dispatched to battle a second blaze. The area burned reached 19 hectares, according to the county government.

During the first three months of this year, parts of Liangshan have seen higher temperatures and less rainfall than normal. The prefecture will have windy weather on Tuesday, with potential hazards for wildfire, the prefecture's meteorological department said.

The prefecture, which has experienced many forest fires, will have winds on Tuesday, and the potential for more fires remains high, it said.

In addition to the persistent dry weather, strong winds and high temperatures in these regions, Tomb Sweeping Day, which fell on Friday, also added hazards because of the tradition of burning offerings for ancestors.

A man was detained after he was suspected of causing a fire by burning offerings in a forest area of Gongxian county, Yibin, on Sunday, the county government said in a statement. It said that the fire has been put out and there were no casualties.