The anti-stall system on a Boeing Max 737 aircraft may have automatically activated and sent an Ethiopian Airlines plane into a fatal plunge, latest investigations showed.

The finding based on data from the plane's flight recording black boxes is tentative, according to news reports, but the Ethiopian plane's erratic flight on March 10 resembles the problem a Lion Air flight in Indonesia experienced prior to crashing last October. The two crashes killed all 346 passengers and crew on board the flights.

Last week, aircraft-maker Boeing said it had revised the plane's flight-control system and called the new software "more robust" than the initial version. But the company stressed that the upgrade did not mean the original design was inadequate.

If the nose of the Max 8 model rises, threatening a stall, the aircraft's anti-stall device－called the Maneuvering Characteristics Augmentation System, or MCAS－automatically points the nose of the plane down to gain speed.

Early evidence suggested that the Indonesia flight's pilot struggled to keep the nose of the plane up while the system automatically forced it down.

The pilot of the Ethiopian Airlines flight experienced a similar problem after the MCAS system engaged, according to news reports.

The Wall Street Journal on Saturday reported that a reconstruction of the final moments of the Ethiopian jet described by people close to the crash investigation, airline executives and pilots, "paints a picture of a catastrophic failure that quickly overwhelmed the crew". "Pitch up, pitch up!" one pilot said to the other minutes before the plane accelerated toward the ground and crashed, the newspaper reported.

The anti-stall system can be shut off by flipping a switch on the throttle console between the pilot and co-pilot.

Pilots flying the 737 Max were alerted to the anti-stall prevention system only after the Lion Air crash and saw almost no mention of it in manuals, according to news reports.

Indonesia's national airline Garuda Indonesia said it plans to stick with Boeing for its next aircraft order but seeks to renegotiate its current contract to provide for models other than the 737 Max. 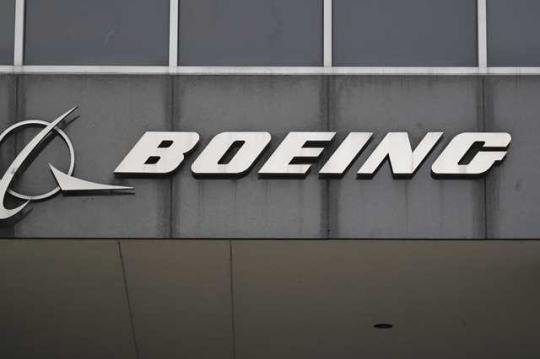 The Boeing logo is seen at the headquarter in Chicago, March 13, 2019. (Photo/Xinhua)

Garuda had said it planned to cancel delivery of 50 Max jets following the fatal crashes of the model in Indonesia and Ethiopia.

"What is certain is that we will not change to another brand, but ask Boeing to offer products other than the Max 8," Garuda's chief executive, I Gusti Ngurah Askhara Danadiputra, told The Wall Street Journal. "Boeing understands Garuda's position and will study the possibility of restructuring the contract."

Garuda said it may want the revised order to include wide-body planes. The 737 Max is the latest version of Boeing's narrow-body 737 plane.

An airline canceling an order loses its deposit－usually about 5 percent of the purchase price－as well as any payments made as much as two years prior to delivery. In general, an airline pays 40 percent to 60 percent of the cost on delivery.

Garuda's effort to renegotiate the contract would save the airline money and would be a boost for Boeing's reputation, tarnished by the recent crashes.

A lawsuit was also reportedly filed in Chicago against the aircraft giant, on behalf of a citizen of Rwanda killed in the Ethiopian crash, alleging design defects in the flight control system.

The Boeing 737 Max, introduced in 2017, has flown safely in North America, Europe and China. The U.S. and 42 other nations, including China, grounded the plane following the crash of the Ethiopian Airlines plane.

The crashes of Boeing Max jets in Indonesia and Ethiopia have forced the U.S. Federal Aviation Administration, or FAA, to review procedures used to certify aircraft safe for commercial use.

For decades, the FAA has delegated some authority for certifying new aircraft to the manufacturers, reducing government costs and, defenders say, speeding the rollout of new models. At a Senate hearing March 27, critics said regulators and Boeing had become too close and the cozy relationship endangered air safety.

However, the European Aviation and Space Agency certified Boeing Max aircraft as safe, but noted pilots should receive additional training needed to control "unusual" situations that may have confronted the pilots of the Lion Air and Ethiopian Airlines flights.

The two airlines reportedly declined to purchase two add-on safety devices that might have helped the pilots keep the doomed Max jets in the sky, with neither airline paying extra to have Boeing install the devices to have the "angle-of-attack" system display the readings of two sensors or for a "disagree light" which is activated if the sensors produce conflicting readings.