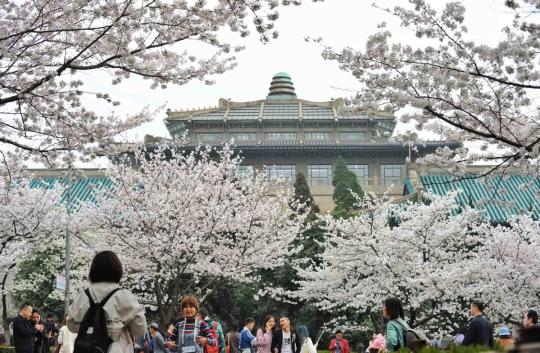 Wuhan University in Hubei Province attracts crowds of people not only for its academic achievements but for its cherry blossoms in spring.

The university has been offering free reservations for cherry blossom watchers to visit the campus since last week, allowing 15,000 visitors Monday through Friday and 30,000 on weekends, the university's website said.

This year, 5G technology was introduced for the first time on Sunday by the Hubei branch of China Mobile to broadcast the campus scenery.

He said the broadcast was viewed by tens of thousands of people in an hour and a half.

"The cherry trees have a very short flowering season, making people more eager to see them in full bloom," he said. "Also, Wuhan University itself is a tourist attraction known for its palatial buildings. Cherry blossoms increase the attractiveness of the campus."

However, some improper activities, such as shaking the trees and ticket scalping, have not been eradicated, even though strong oversight has been imposed by the university.

On Sunday afternoon, a male visitor dressed in a kimono-like outfit that he said was traditional Chinese, along with his friend, were reportedly attacked by guards when trying to get into the campus. The university said late Monday that one of the two visitors, surnamed Zhang, didn't make a reservation on the university's platform but tried to force his way in anyway, and a physical altercation with the guards ensued.

The university said the two guards involved had been reprimanded and that the civilized enforcement of campus rules would be enhanced.

It also released a visual special-effects filter for mobile devices imitating the falling of blossoms via TikTok, a video-sharing platform (known as Douyin in China), to help satisfy visitors and prevent them from damaging the trees.

Yuan Liao, a 26-year-old from Changsha, Hunan province, who plans to visit the campus this weekend, said he understands the university's management approach.

"Making a reservation beforehand can help the university better organize the campus and secure a safer experience for visitors," he said. "It's also an effective way to control visitor numbers and offers visitors a better view of the blossoms."

According to the reservation instructions on the university's website, visitors should reserve three days ahead. Three people are allowed entry for each reservation.

Reservations will close on April 3. Visitors can see the cherry blossoms from 8:30 am to 5:30 pm on weekdays and 8 am to 6 pm on weekends.