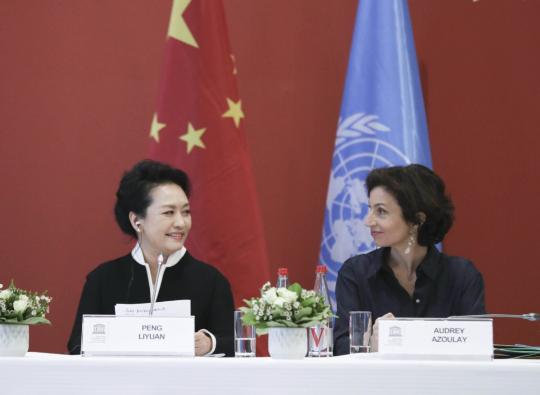 China will continue to support UNESCO in empowering more women and children to embrace a brighter future via platforms created by the development of the Belt and Road, said Peng Liyuan, wife of President Xi Jinping.

Peng said promoting education of girls and women is a lofty cause that deserves attention, support and dedication from more people.

After some laureates of the UNESCO Prize for Girls' and Women's Education gave brief remarks on their understanding and promotion of the undertaking, Peng said she appreciated the efforts made by the United Nations body and the prizewinners.

In discussing her work in this field over the past five years, Peng referred to the Spring Bud Project, a program launched by China Children and Teenagers' Fund to both help female school dropouts return to the classroom as well as improve teaching conditions in impoverished areas.

Knowledge and skills are two great forces that can change the lives of women, and with equal and quality education, they all have the opportunity to be outstanding, she added.

In the meeting with UNESCO Director-General Audrey Azoulay before the special session, Peng said China firmly supports the UN body and her work, and she hopes China and UNESCO will continue to deepen cooperation to jointly promote world peace and prosperity as well as the progress of human civilization.

Azoulay said that China has made great achievements in the past 70 years, including progress in the development of education and women's rights.

UNESCO highly values the cooperation with China and the support from China is of great importance under current circumstances, she said.

In an interview with Xinhua News Agency, Azoulay spoke highly of Peng as a UNESCO special envoy.

"Peng is particularly committed to the central role of teachers in gender equality," Azoulay said, adding that UNESCO appreciates the contribution of Peng to educating girls and women, as well as the long-term partnership with China in helping ensure that access to quality education for all becomes a reality.

Peng was nominated as a UNESCO special envoy on March 27, 2014. Since then, Peng has worked closely with UNESCO to promote equal rights for women in education, self-development and in achieving success, Azoulay said.

Supported by the Chinese government, the UNESCO prize directly contributes to the attainment of the 2030 Sustainable Development Goals, particularly those dealing with education and gender equality.