In Hai'anji Central Primary School, located four kilometers away from ground zero, hundreds of students gathered on the playground to observe the Chinese national flag flying half-mast. Some students had families and friends who were killed or injured in the massive explosions.

The blast at the Tianjiayi chemical plant happened last Thursday, killing 64 and injuring over 600. Nearly 3,000 homes close to the industrial area were damaged or destroyed. The powerful blast triggered a 2.2-magnitude earthquake. 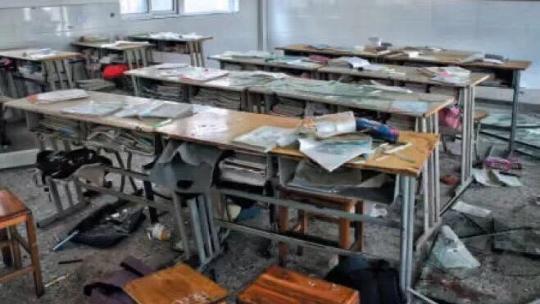 A view of a classroom after the deadly explosions at Tianjiayi chemical plant. /CGTN Photo

In one of the first classes in the school on Tuesday, students got an assignment on the topic "storms are often followed by sunshine." It's an apparent attempt by teachers to provide psychological counseling for the children.

During the rescue operation, the school was temporarily used by local armed police as a dorm. Before the police returned the school to the students, they left some food and water in the classroom, as well as some heartwarming notes.

On one blackboard, there are words saying, "Dear students, we apologize for occupying your place. Before we left, we briefly cleaned up your classroom. Hope you can all study hard to make more contributions to the rise of our nation. Yancheng armed police." 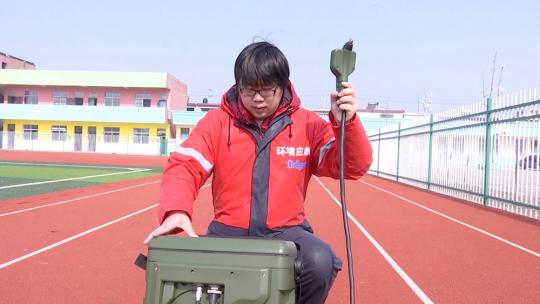 A member from the environmental emergency monitoring team monitors air quality at the school. /CGTN Photo

Despite the gentle gesture by the police, the public continues to question the cause of the deadly incident. The Tianjiayi chemical plant, which is just two kilometers away from the nearby villages, had a terrible record of repeatedly violating environmental protection and work safety laws. But business kept going for years until the explosion took place, sending destructive shockwaves for several kilometers.

In response to concerns over whether the air quality is healthy enough for children to go back to school, authorities say data sampled suggest air quality has now stabilized and is within a normal level.