Finance standards to be unified 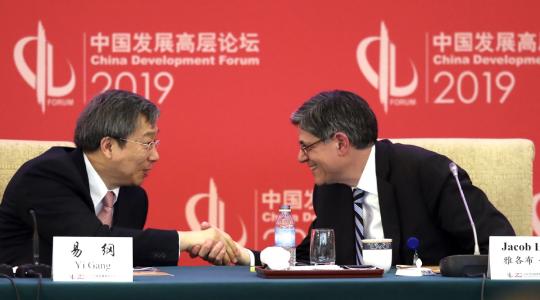 China will upgrade its financial opening-up tasks for this year by unifying regulatory rules for domestic and foreign players in the financial sector, and improve connections between onshore and offshore capital markets, according to Yi Gang, governor of the People's Bank of China, on Sunday.

The standards required for foreign institutions, in terms of share proportion, company form, business scale, shareholder qualification and number of licenses, will be the same as those for Chinese companies, he said at the China Development Forum 2019 in Beijing.

After checking a "to-do" list set a year earlier, Yi expressed satisfaction with what has been achieved so far.

"Most of the 11 tasks for financial opening have been done, leaving very little work to implement," he said. "But the overall level of opening-up still has room to improve."

The further opening-up will tighten connections between domestic and overseas capital markets, with continual improvement of the qualified foreign institutional investors scheme, as well as the Shanghai-Hong Kong and Shenzhen-Hong Kong stock connect programs, Yi said.

"Both Chinese and foreign institutions can equally enter business fields that are not named in the negative list. But all players should have licenses before starting to do business, and their activities need to be under the same regulation," he said.

Market watchers expect new measures to debut this year to attract more foreign financial institutions to China, owning more shares in joint ventures or even taking control of the company, as well as widening the domestic financial markets for overseas investors.

"Currently, when foreign investors enter Chinese market, they will find out that the hedging tools, financial derivatives and other financial products still need to further develop. The key task this year is to provide sufficient financial hedging instruments to let investors effectively manage risks," Yi said at the forum.

Financial opening-up is an independent decision made by Chinese policymakers based on the country's self-development, Yi added. "The current monetary policy framework can cope with further opening of the financial market."

He also pledged to improve transparency in accounting, taxes and regulatory rules.

"Deleveraging is central, but it is hard, so I suggest Chinese policymakers stick with it going forward," Lew said, stressing that risky areas may include financial product innovation, shadow banking and fintech.

As of the end of last year, China's macro leveraging level - the total debt-to-GDP ratio, declined to 249.4 percent from 250.9 percent in 2017, according to data from the central bank. Yi, the governor, said that to raise funds through the equity market, rather than relying too much on issuing debt, is a method to stabilize the level of leverage.

Starting next month, the yuan-denominated government and policy bank bonds will be added to the Bloomberg Barclays Global Aggregate Bond Index, phased over a 20-month period. After their full inclusion, yuan-denominated bonds will become the fourth-largest currency component, following the dollar, the euro and the Japanese yen.

Global banks predicted that the index inclusion will inject about $700 to $800 billion of overseas funds in the next five years.

Based on a recent survey conducted by Bloomberg, more than 67 percent of participants in Asian markets expect to invest in Chinese onshore bonds this year, and the index inclusion is a key driver.

"We believe 2019 will be a tipping point in China's bond market, as all four elements - regulation, market access, investor demand and benchmarks - are now much more firmly in place," said Peter Grauer, chairman of Bloomberg L.P.