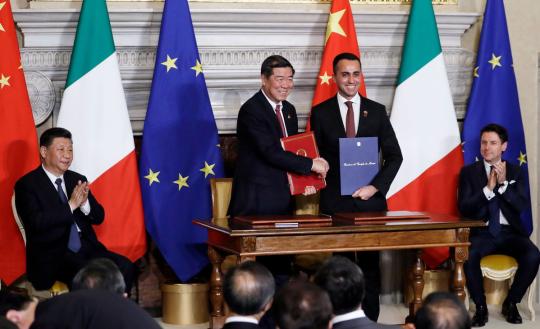 President Xi Jinping and Italian Prime Minister Giuseppe Conte (both seated), witness the signing of a memorandum of understanding on joint construction of the Belt and Road between He Lifeng, head of the National Development and Reform Commission, and Luigi Di Maio, Italian deputy prime minister, in Rome on Saturday. (Photo by Feng Yongbin/China Daily)

Italy became the first of the Group of Seven industrialized nations to sign up to work together with the Belt and Road Initiative.

President Xi Jinping and Italian Prime Minister Giuseppe Conte witnessed the signing of the intergovernmental memorandum of understanding on joint construction of the Belt and Road after they held talks in Rome on Saturday during the Chinese leader's state visit to the country.

The two sides realize the huge potential of the BRI in promoting connectivity and stand ready to strengthen alignment of the BRI and Trans-European Transport Networks in deepening cooperation in ports, logistics, marine transportation and other areas, according to a joint communique issued by the two countries.

During his talks with Conte, Xi said China and Italy's historical status as nations at either end of the ancient Silk Road made it natural for them to cooperate on building the Belt and Road.

The two countries should take the MOU as an opportunity to connect the BRI with Italy's own development plans, including building seaports in northern Italy and investing in the nation, Xi said.

Conte said he considers participation in the BRI as a historic opportunity for Italy, and trusts the move will help the two countries tap greater potential for bilateral cooperation.

The prime minister said he plans to attend the second Belt and Road Forum for International Cooperation, which will be held in Beijing next month.

Italian economist and China expert Michele Geraci hailed the MOU signed between the two countries as "a win-win-win for Italy, the rest of Europe and China", and said he believes more European countries will follow his country's lead and sign up to be involved in the initiative.

Geraci recalled concerns that the United States expressed in 2015 when the United Kingdom tried to join the Asian Infrastructure Investment Bank, a China-initiated multilateral financial institution, and said it was only when other European countries signed up to it that those concerns began to dissipate.

"I expect the same thing to happen now (about the BRI)," he said.

Sun Zhaolong, a researcher at the Academy of Contemporary China and World Studies, wrote in an article that Italy's involvement in the BRI will play an exemplary role in attracting more countries to the platform for international cooperation while allaying concerns of some countries over the initiative.

Former Italian Prime Minister Romano Prodi also said in an interview with China News Service that Italy could be a protagonist in Belt and Road cooperation with China.

During their talks, Xi and Conte also agreed that the two countries should jointly uphold multilateralism, promote free trade and cement ties between China and the European Union.

Conte called Xi's visit to Italy highly significant, and said it would bring the bilateral relationship to a higher level.

He said Italy firmly supports multilateralism and free trade, and his country would like to enhance communication and coordination with China to promote the healthy and stable development of EU-China relations.