Chinese wushu catches on in Belgium 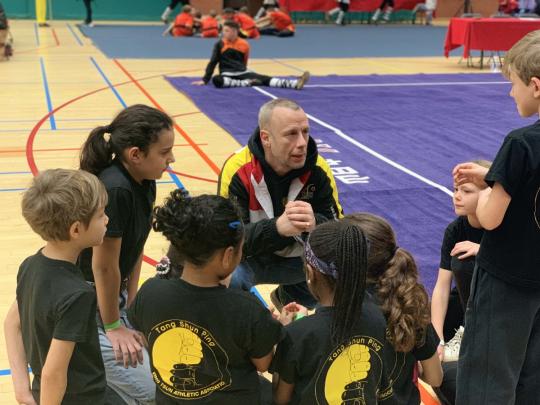 Young contestants get a pep talk from their coach at the 2019 Belgian Wushu Championship in Aarschot, Belgium, on March 9. (Photo by Ning Yuqi / For China Daily)

Members of the Belgian Sanda Academy are learning traditional Chinese boxing, known as sanda, defined by powerful round kicks and precise parrying, along with counter punching and shoulder rolls.

At the beginning of each class students give the palm salute, traditional in Chinese etiquette, to show respect for their wushu masters.

Sandais a branch of wushu that combines traditional kung fu and modern combat techniques. Developed in the early 19th century, it has since gained popularity worldwide.

Gualini Ismaele, founder and head coach at the Belgian Sanda Academy, began to learn the martial art in 1991.

"Sandais in my heart. The beauty of it is that you must consider bagua(eight diagrams in Taoism representing the fundamental principles of reality) and make your opponent turn, then find the best entrance to keep on fighting," Ismaele said.

To bring sandato Europe, Ismale established the academy in 2010 and over the past nine years has taught about 200 students.

"Most of the students are interested in the particularity of Chinese boxing in comparison with Thai boxing or the American way of boxing. For the rest, they would be more interested by learning the culture and knowledge of traditional China," said Ismaele.

One of his students, Magomed Dogmaev, 17, has practiced Sandafor over five years. For him Sandais about more than just self defense.

"When I was a child, my father encouraged my brother and me to take up different martial arts for self-defense. And now I want to become a great boxer," said Magomed.

"I think the most important thing in sanda, according to the traditional way, is to follow the part of taiji-diagram in the way you move the fists for the fight."