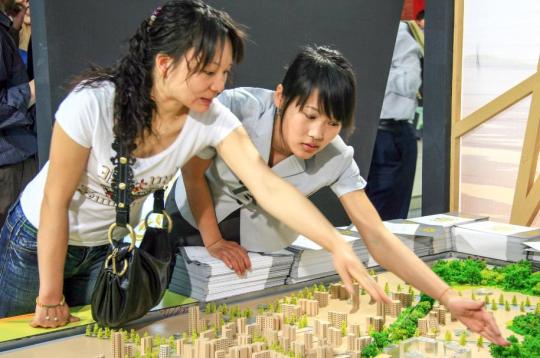 A prospective homebuyer (left) consults a salesperson for details while reviewing the model of a housing project at a developer's sales office in Chengdu, Sichuan province. (Photo by Huang Jiaming/For China Daily)

The annual two sessions of China's top legislature and top political advisory body, which ended on Friday, once again focused attention on the direction of the real estate market, particularly the residential segment, a key economic concern.

Although the bullish stock market has stolen realty's thunder of late, industry experts said intense discussions on micro controls, property tax and long-term real estate mechanisms have shifted the economic spotlight back on to property this month.

The two sessions are always closely watched by all the key economic sectors, and property is no exception, as the meetings of deputies, or China's lawmakers, set the tone for related policies.

"Conventionally, we can read the policy focus for the coming year from the two sessions, and the Government Work Report delivered by the Premier in particular," said Regina Yang, director and head of research at Knight Frank, a real estate consultancy.

"The Premier stated that improving the local taxation system to gradually promote the legislation of property tax is one of this year's tasks. This suggested the tax will be part of the long-term mechanism for the property sector in the future," said Lu Wenxi, a researcher with Centaline Shanghai, a property consultancy.

Experts said the proposed property tax, which has stirred heated debates for a decade now, could well become reality in the years to come.

"The procedure for a property tax law has been progressing, and media reports suggest it could be submitted to the Standing Committee of the National People's Congress (China' top legislature) for deliberations later this year. So, it could possibly take effect in the year 2021 or 2022," said Chen Sheng, president of the China Real Estate Data Academy.

"As of now, the issue of the proposed property tax has attracted a lot of public attention. The market has changed its attitude toward it. From doubting its possibility, the market has traveled to widespread common sense. Everyone now thinks it's just a matter of time before the tax becomes a reality," said Liu Tianyang, vice-president of Centaline for the Chinese mainland, and president of Yuancui Information Technology, which is a fully owned subsidiary of Centaline Group.

Economic collaboration and balanced layout within the city clusters will narrow the gaps between the cities and benefit the regions as a whole, he said.

"The recently announced Guangdong-Hong Kong-Macao Greater Bay Area plan that is set to boost South China will bring about great opportunities, and the property market will be one of the first sectors to benefit," said Yang of Knight Frank.

Compared to previous years, property speculation was not mentioned in this year's Government Work Report. This suggested the property market has shown signs of cooling under consistent micro control policies, according to Lu.