China has resources to carry on reform, says former governor of central bank 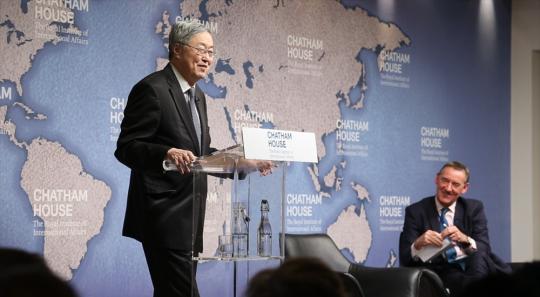 Zhou Xiaochuan, former governor of the People's Bank of China, speaks in London on Tuesday. （Photo by Ouyang Xueyan/chinadaily.com.cn）

"Because the (Chinese) policymaker is quite pragmatic, and China is still quite a high-savings country - the savings rate now is still 45 percent of GDP - we have the resources to carry on the reform and correct the mistakes we made ourselves," Zhou said in a speech at The Royal Institute of International Affairs, which is commonly known as Chatham House.

China should study Japan carefully to ensure it does not encounter similar problems, Zhou said.

"As an Asian economy, Japan had very fast economic development but later on had a so-called 'lost decade'," Zhou said. "The Chinese economy has similar overleveraged problems, so we need to absorb the knowledge and lessons from Japan."

The lost decade he referred to points to a period of economic stagnation in Japan that followed the nation's asset price bubble collapse in the early 1990s.

Zhou stepped down as governor of the People's Bank of China in March 2018 after serving in the position from December 2002, making him China's longest-serving central bank governor since 1949.

During his tenure, China became the world's second-largest economy and a consequential player in global financial markets.

Zhou, who is now president of the China Society for Finance and Banking, has been recognized for his achievements in reshaping the Chinese economy and received a 2019 Central Banking Award, a top industry accolade.

He is well-known for his high level of integrity, intellectual rigor and bold reforms that had served the public interest in China and elsewhere.

On the subject of encouraging confidence in China among private sector enterprises, Zhou said: "The government needs to be careful in policymaking to create a level playing field, to prevent the risk of allocation crowding out the private sector."

But he also acknowledged that some large private companies had developed investment risks and gone bankrupt because they had borrowed money fraudulently and used it to participate in risky ventures, creating problems for society and the economy.

The private sector's confidence may have been lowered due to those, he said.

"So we need to have a good procedure to dispose of those failed companies; meanwhile, we still need to emphasize how to improve the Chinese private sector as a major engine of the economy."

China's first new foreign investment law in decades, considered one of the most important legislative items at this year's gatherings of the National People's Congress and the Chinese People's Political Consultative Conference in Beijing, is likely to be passed later this week.

The introduction of such legislation should give confidence to foreign investors and help solve issues around unfair competition, Zhou said.

It is important for the new law to prevent unfair competition at the regional levels, and the law clearly stipulates what to implement and what to avoid, including some local industrial policies, in order to give foreign investors confidence, he said.