Giant hornet found in Yunnan might be world's biggest 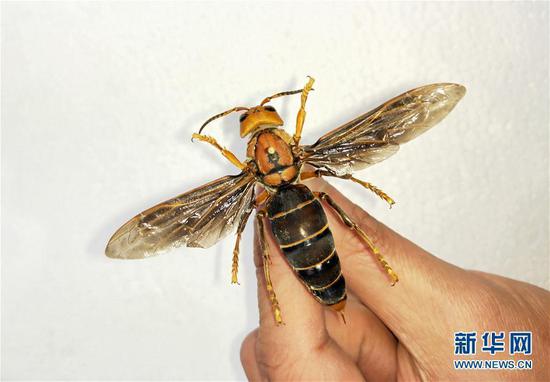 A hornet with a wingspan of 9.35 cm discovered in Southwest China's Yunnan province. （Photo/Xinhua）

Scientists have discovered a hornet with a wingspan of 9.35 cm in southwest China's Yunnan province, much larger than the previously known record of the species.

Zhao Li, the curator of the Insect Museum of West China in Sichuan Province, said they found the Vespa mandarinia in Pu'er, bordering Myanmar. They have not found the queen wasp, which they say is sure to be even larger.

The worker bee has a body length of 6 cm. Its beehive has an inside diameter of 2 meters.

Zhao said they have collected over 100 specimens of the hornet and believe it is a new subspecies.

He said the hornet is one of the world's most dangerous insects, as it has a stinger as long as 6.35 millimeters, which has poison to trigger severe reactions.

There are over 5,000 varieties of hornet. The previous record-holding giant hornet has a wingspan as long as 7.6 cm.