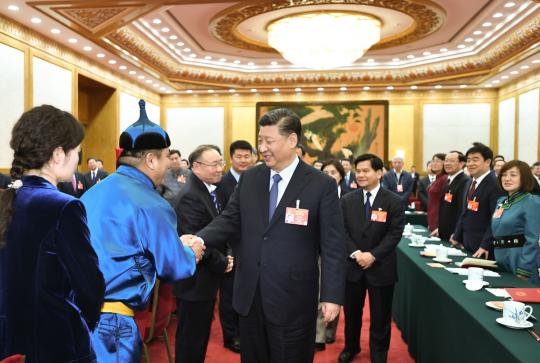 President Xi Jinping joins a panel discussion with the deputies from Inner Mongolia autonomous region at the second session of the 13th National People's Congress in Beijing on Tuesday. (Photo/Xinhua)

President Xi Jinping called on the Inner Mongolia autonomous region to maintain its strategic focus on environmental protection and build an ecological shield for the country's northern border on Tuesday.

Xi, also general secretary of the Communist Party of China Central Committee and chairman of the Central Military Commission, made the remark while reviewing the Government Work Report with deputies to the National People's Congress from Inner Mongolia.

Local governments should not pursue economic growth at the cost of sacrificing the environment when economic development encounters difficulties, Xi said.

During the discussion, eight NPC deputies spoke on such issues as guarding the environment, developing private businesses, reducing poverty and improving healthcare.

Xi highlighted the importance of ecological civilization, saying that it has strategic significance in upholding and developing socialism with Chinese characteristics for a new era.

Inner Mongolia's environment is related not only to the livelihood of the local people, but also to the ecological health of the country, he said.

It's a strategic decision to build Inner Mongolia into an important ecological shield for northern China, and local government must shoulder this responsibility, Xi said.

Protecting the environment does not contradict the goal of developing the economy, Xi said, warning that there should be no crossing the red line of ecology.

China must keep its strategic focus on environmental protection at a time when the country is switching from high-speed growth to high-quality growth, Xi said. Protecting grasslands and forests is the top protection mission in Inner Mongolia, he said, adding that restoration must follow the laws of nature.

The president instructed the government to maintain its momentum in fighting pollution, saying companies that rampantly discharge pollutants must be punished.

Noting that this year marks the 70th anniversary of the founding of the People's Republic of China, he called the tasks of maintaining economic development and social stability arduous.

He encouraged Inner Mongolia to make efforts to ensure stable growth, achieve victory in poverty reduction, raise the people's livelihoods and promote the common prosperity of all ethnicities.

Xi also urged government at all levels to follow the Party's tradition of frugality. The purpose of a tight government budget is to make a better life for the people, he said.