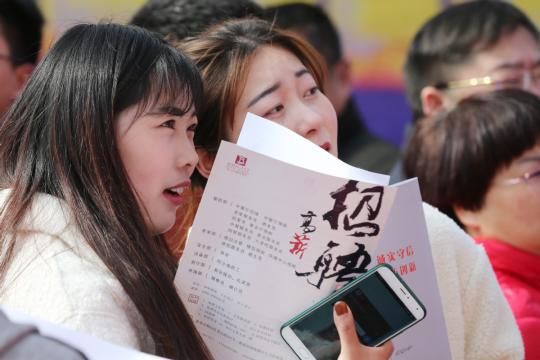 Education and employment are the issues that most concern young people for the upcoming annual two sessions of China's top legislative and political advisory bodies, a new survey showed.

More than 49,000 people nationwide born after 1980 participated in the survey, which was conducted by the Center for Social Research of China Youth Daily from Feb 11 to 16.

Education received the most attention from respondents. It was chosen by 79.8 percent, followed by employment (77.1 percent), housing (56.1 percent) and medical care (53.8 percent).

People are most satisfied with the rule of law, which got 7.29 points out of a total 10 points, followed by childbearing, education and elder care.

Yu Fengyi, who works in Changsha, Hunan province, made great effort to get his daughter enrolled in a public kindergarten. It is, however, a bit far from his home, which means Yu's parents have to spend lots of time to transport his daughter to and from the kindergarten every day.

Private kindergartens cost several thousand yuan a month, but there are not enough public ones, said Yu, who is in his early 30s.

"I hope the government will build more public kindergartens and offer more subsidies to private ones so that they would be cheaper and more preschool children would have access to affordable education," he said.

A record 8.34 million college students are expected to graduate in 2019 and will face greater challenges in landing a job, according to the Ministry of Education.

Yu Ting, a third-year university student at Central China Normal University in Wuhan, Hubei province, said, "I am trying hard to find a good job, but it has become increasingly difficult as there are more people with advanced degrees."

The Ministry of Education introduced a package of preferential policies in December to help college students who will graduate in 2019 find jobs or start businesses.

The package includes 19 measures designed to offer better support to graduates or companies that employ them. They include more incentives for those willing to work in grassroots units or remote rural areas and training allowances and tax concessions to micro, small or medium-sized companies that hire new graduates.