Tasks listed in protection of Qomolangma 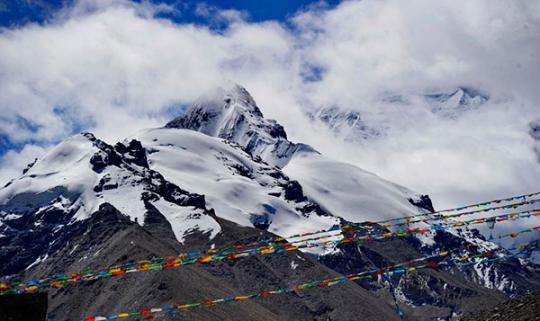 The recent ban on ordinary tourists entering the core zone of Qomolangma National Nature Reserve is aimed at restoring the area's vulnerable ecosystem after years of rapid tourism development, a spokesman from the Ministry of Ecology and Environment said on Thursday.

Liu Youbin, spokesman with the ministry, said that travelers bound for Qomolangma (or Mount Everest) registered remarkable growth because of local tourism development in recent years.

However, the mushrooming number of tourists and the litter they left behind put great pressure on the environment. The ministry will therefore strengthen its environmental inspections and make more stringent waste disposal requirements for the region, he said.

To restore Qomolangma's ecological balance, the ministry amended mountaineering regulations and environmental protection rules enforced by local authorities under which the number of climbers is restricted. Climbers will also be required to receive ecological protection lectures and carry out 8 kilograms of waste when they depart.

In early December, the Tibet autonomous region announced a ban on ordinary travelers entering the reserve's core area and said it would move a tourism center previously in that area to the outside.

Liu said the new tourism center near Rongpo Monastery is just 2 kilometers from the previous one. Travelers can still take in broad views of Qomolangma.

The ban accords with the protection regulation and is an effective measure for safeguarding Qomolangma's fragile ecosystem, he said.

"Qomolangma is a dream destination for many travelers, but its vulnerable ecosystem requires care by every visitor," he said. "The ministry will consolidate the reserve's waste disposal and strictly review violations of the rules to better protect the natural reserve."

Also, inspections have been enhanced to regulate tourist attractions at altitudes below 5,200 meters, and regular cleanups are underway to remove waste around the base camp.

Ecological infrastructure has been added along routes from the reserve's north entrance to the base camp, including trash bins, eco-friendly toilets and restrooms. Mountain climbers were also offered portable toilets, Liu said.

So far, the trash cleanup is going well, Liu said. Junk heaps and waste water along routes from the region's Dingri county to the reserve were cleared by the local government, and waste disposal along hiking routes are also under control, he said.