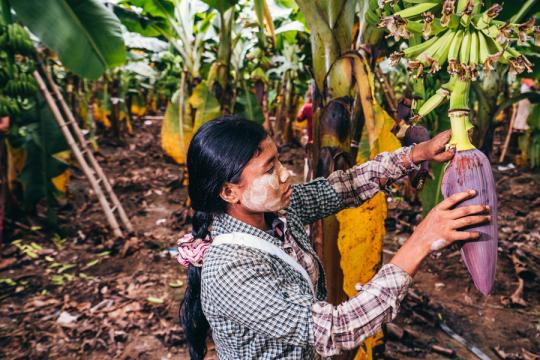 A farmer in northern Myanmar takes care of a banana tree at one of the agricultural bases operated by Tengchong's Jinxin Trade Co. (Photo provided to China Daily)

At a fruit market in Wanding, Ruili, a county on the China-Myanmar border, workers are transferring watermelons and muskmelons from Myanmar to heavy trucks which will soon leave for Beijing, Shanghai and other cities in China.

"Burmese fruit tastes good and enjoys great popularity among Chinese people," Said Liu Hongfang, a manager of the market. "About 400 Burmese trucks (3,000 metric tons) of fruit come and go in the market every day."

Thanks to closer cooperation between China and Myanmar, the company has expanded its scale and business, built refrigeration houses in Wanding and worked with locals of Mandalay to grow watermelon.

There are only about 400 kilometers from Mandalay to Myanmar's border town of Muse, next to Ruili in Southwest China's Yunnan province, but it would take the truck drivers two days because of the narrow and zigzag roads, according to Liu.

"What's worse, if a traffic accident occurs, the fruit will rot on the road," she added.

Fortunately, Liu's worries will be a thing of the past with the construction of a railway project linking Yunnan with Mandalay, which was proposed in 2017 as part of the plan of building the China-Myanmar Economic Corridor.

"Myanmar considers the China-Myanmar Economic Corridor be crucial to our broader efforts to promote economic and social well-being of our peoples," said U Tun Tun Naing, permanent secretary of the Ministry of Planning and Finance of Myanmar.

The signing of the framework agreement on the Kyauk Phyu SEZ Deep-Sea Port project in November 2018 is a glorious chapter in the history of our collaboration, he said, adding that "this project is critical in enhancing regional connectivity, boosting the growth of local economies and strengthening the ties between China and Myanmar."

Zhang Yi, a Burmese student from Pu'er city in Yunnan, was employed by a Chinese company in Yangon, Myanmar when she graduated in 2015.

A year later, she resigned and started her own business in the tourism industry because she believed that the Belt and Road Initiative would be crowned with success in Myanmar.

Hearing about the progress of the China-Myanmar Economic Corridor, Zhang invested all the money she has made to expand her business and launched customized tour products and high-end business group reception in 2018.

"More tourists will travel by train between the two countries after the railway project is complete," she said.