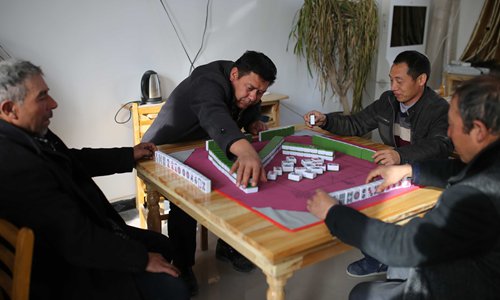 Ten percent of the apartments in the residential community are public rental housing.

A total of 200 households from different ethnic groups applying for the housing have been arranged to live next to each other at these apartments in consideration of their willingness and conditions, according to an introduction by the administrative office of the community.

Discounts of 3 to 5 percent were also given to people who buy apartments in the community and choose to live next to other ethnic groups.

Villagers in rural areas in Aksu are also encouraged to live with different ethnic groups.

In Tuowanke Maigaiti village in Wushi county, residents of affordable housing are arranged to live with people of different ethnic groups as their neighbors.

"For the 82 houses which were built with government subsidies, more than 70 households of different ethnic groups have been moved in," Zhuang Qiang, an official of the working group stationed in the village of Tuowanke Maigaiti, told the Global Times.

Working groups stationed in villages are formed by officials, who are deployed from the Xinjiang regional government to help with poverty alleviation work and promote ethnic unity.

In March 1989, Singapore implemented an ethnic integration policy to promote racial integration and harmony in Housing and Development Board estates including ethnic quotas in neighborhoods and blocks.

Arranging neighborhoods of different ethnic groups helped dispel misunderstandings among them and form "a shared national identity," according to a 2016 article by Gao Yongjiu, a professor at Lanzhou University.

As many people originate from Southwest China's Sichuan Province, playing mahjong has become a form of entertainment for villagers in Tuowanke Maigaiti.

The Global Times reporter saw four people of different ethnic groups playing mahjong together in an entertainment room on Saturday.

Casting away the red dragon tile, a player told the reporter that although some may having difficulties speaking Putonghua, all could speak the suits of mahjong fluently.

As the Chinese saying goes, "A good neighbor is better than a brother far away." Aside from arranging neighbors, residents in urban and rural areas are also paired with different ethnic groups in the same residential communities, officials told the Global Times.

Shao Cuizhu, 56, and Azigul Emer, 45, have been paired sisters in Chaoyang residential community since 2010.

Emer shared her memories of being cared for by Shao when she was hospitalized. Shao said she was touched when Emer helped look after her and her granddaughter when she broke her arm and legs.

"Even my blood-bond sister is not as intimate to me as Azigul Emer," Shao said, noting that they meet every day in summer to talk or take walks together.

Erken Kadir, 60, who lives in the residential community, told the Global Times that living with different ethnic groups is good since "we can learn from each other."

Kadir is paired with Wang Ying, an 80-year-old resident in Chaoyang residential community, for the same interest in music.

"We met in 2014 when I saw my brother Wang playing erhu [two-stringed fiddle] during an artistic performance," Kadir said.

"We first became friends and then decided to be paired relatives… We usually play erhu and dombra [long-necked Kazakh lute] together."

Kadir said that he felt the distance between different ethnic groups was shortened when they communicate and learn each other's language.

Asked whether he suffered any inconvenience living alongside different living habits, Kadir said, "Residents here pay respect to each others' habits and traditions. There is no need to haggle."