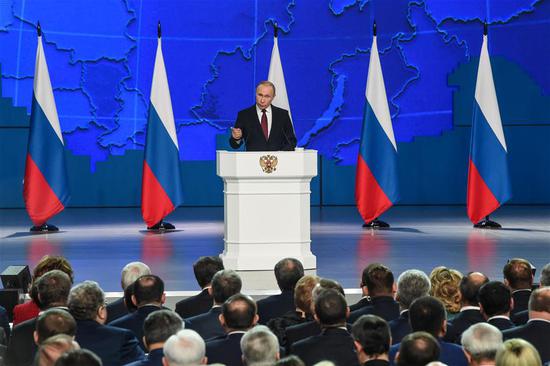 Russia's President Vladimir Putin speaks during the annual address to the Federal Assembly in Moscow, Russia, Feb. 20, 2019. The preliminary results of the implementation of Russia's national projects should be summed up in 2020, Putin said Wednesday. (Xinhua/Evgeny Sinitsyn)

Russian President Vladimir Putin said in his annual address to the parliament Wednesday that the government will boost expenditures on national projects concerning social development and beef up its military might to protect the country against external threat.

The 90-minute state-of-the-nation speech at the Federal Assembly, Putin's 15th appearance of this kind, touched upon a wide range of issues from economic and demographic challenges to foreign and defense policies.

The preliminary results of the implementation of Russia's national projects should be summed up in 2020, Putin said.

"This year people should feel real change for the better. It is on the basis of their opinion and assessments at the beginning of next year that we will evaluate the first results of our work on the national projects," Putin said in his annual address to the Russian Federal Assembly.

The government will then draw appropriate conclusions about the work quality and performance at all levels of executive power, he added.

Currently, the Russian government has completed the stage of outlining tools for achieving these long-term strategic goals and work to achieve the goals has to begin immediately, Putin said.

"Putin demonstrates continuity," Director General of the Center for Political Information Alexey Mukhin told Xinhua. "In the previous address in March 2018, he formulated and set strategic goals and objectives, and in this address he developed and presented a 'road map' of solutions to social and economic problems."

According to Putin, the national projects are designed to improve the quality of life for all Russian citizens, which can only be achieved by "generating a momentum in Russia's development."

In particular, Putin noted that in Russia there are about 19 million people living below the poverty line, adding that combating poverty has become an urgent issue.

He proposed establishing a mechanism of social contracts in certain regions to provide assistance for people with low incomes, such as helping people find jobs as well as providing financial resources and training programs to improve their skills.

"It is estimated that more than 9 million people will be able to benefit from these support measures over a five-year period," Putin said.

Meanwhile, Putin warned that Russia has entered an extremely challenging period in terms of demographics as the birth rate is declining.

But he said that the Russian government has come up with a package of measures to support families, including increasing maternity subsidiaries and allowances for nurses, reducing tax burdens for families and lowering mortgages rates.

According to the president, Russia will return to natural population growth by late 2023 to early 2024.

"Putin gave quite strong therapeutic guidelines that our macroeconomic system is very stable, that there is money, and now it is important to spend it wisely to solve not only strategic tasks such as a technological breakthrough, but also very specific targeted assistance to different population groups," Mukhin said.

In his annual address, Putin also reiterated Russia's stance on missile deployment. He underlined that Russia does not intend to be the first to place missiles in Europe but will develop its defense capacities and take reciprocal measures if the United States does so.

"Russia will be forced to create and deploy weapons that can be used not only against areas, from which a direct threat will emanate, but also against the centers making decisions on the use of missile systems that threaten us," Putin said.

Speaking about the intention of the United States to withdraw from the Intermediate-Range Nuclear Forces (INF) treaty, Putin said that Washington has been violating the benchmark disarmament deal.

He said that Washington's launching intermediate-range missiles under the guise of "target missiles" and deploying launchers in Romania and Poland will dramatically aggravate the situation in the field of international security and create a serious threat for Russia.

Russia therefore will be forced to respond both with "mirrored and asymmetric actions," he said.

Putin stressed that Russia wants peace with all countries, including the United States, but it will develop its military might to protect itself against any threat.

"All our work aimed at increasing our defense capacity has the only goal -- to guarantee the security of our country and our citizens so that nobody would dare not only think about an aggression but even about trying to use pressure methods on our country," Putin said.

He said that Russia wants to have full-fledged, equal and friendly relations with the United States, but some people at the top in Washington are still obsessed with the idea of exclusivity and superiority over the rest of the world.

He suggested that these people should first calculate "the reach and the speed of our prospective weapons" before making decisions that could seriously threaten Russia.

Russian experts said that Putin's remarks sent a clear message to the West warning against any provocation.

"In the context of the growth of the NATO budgets, this is precisely what is intended to cool the ardor of those who are ready to try to ensure their leadership, their global hegemony with the help of making all sorts of adventurous decisions," said Dmitry Novikov, First Deputy Chairman of the Foreign Affairs Committee of the Russian State Duma, the lower house of the parliament.

"Russia has something to answer in the event of an external threat. And those politicians who are now taking decisions to threaten Russia in the most direct way should clearly understand this and figure out the consequences. Otherwise, the consequences will be catastrophic," Mukhin said.