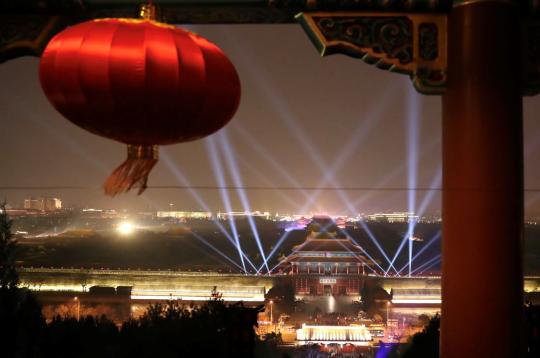 The Palace Museum is lit up on Monday evening for a rehearsal of rare nighttime public tours on Tuesday and Wednesday for visitors who were able to snag the free tickets. （Photo by Jiang Dong/China Daily）

When night falls, do things at Beijing's Palace Museum come alive like in the museum depicted in Hollywood's Night at the Museummovies?

That may be the hope of lucky guests who snagged tickets for rare nighttime visits by the public to parts of the former Forbidden City for this week's Lantern Festival.

It has long been a legend that the imperial complex, China's center of power from 1420 to 1911, is haunted by supernatural spirits at night.

Whether true or not, public enthusiasm was intense on Sunday afternoon when the museum unexpectedly announced an extremely rare two nights of visits－from 6:30 to 8:00 pm on Tuesday and Wednesday－to parts of the outer walls at no cost to ticket holders.

With one exception for a special exhibit in 2015, the Forbidden City had never opened its gates to the public at night since becoming a museum in 1925.

When Tuesday's reservations were opened on the museum's official website around 3:30 pm on Sunday, all tickets were booked within 10 minutes.

When booking for Wednesday opened at midnight, the system crashed for more than an hour due to overwhelming demand. The free tickets were quickly snapped up when it reopened.

The night visitors will climb up to the Meridian Gate on the south side and walk through the southern and eastern sections of walls, which will be lighted by red lanterns. Hanging such lanterns is traditional during the festival, which falls on Tuesday, the 15th day of the first month in the lunar calendar.

Some areas near the walls will be illuminated to offer guests a better night view. A digital projection will re-create a scene from the Northern Song Dynasty (960-1127) landscape painting A Panorama of Rivers and Mountains, on some of the palace's roofs. The painting is part of a key collection of the museum.

All visitors will leave the palace through the Gate of Divine Prowess in the north.

While the museum administration declined to say how many tickets were offered for the night visits, some netizens who were able to make reservations said nearly 3,000 tickets were left at the time the system resumed taking reservations for Wednesday after it crashed.

Aside from those who booked through the system, representatives also were invited from sanitation workers, express couriers, soldiers, police officers, firefighters and other groups of workers in appreciation for their year-round service to the public.

The enthusiasm for the special visits was clear: On a secondhand goods trading website run by taobao.com, a "free" entry ticket was being resold for about 1,000 yuan ($148).

Despite the exception, the curfew remains at the Forbidden City. No one except necessary staff, including a night patrol and a fire squadron, is allowed inside after sunset.

The vast majority of the museum's staff have no idea what their workplace looks like after dark. However, for this special event, the employees will be allowed to attend this week's night visits.

The exception to the curfew, in 2015, happened when one of China's best known ancient works of art, the Northern Song masterpieceAlong the River During the Qingming Festivalwas displayed during an exhibition in the Hall of Martial Valor. The overwhelming number of visitors caused the museum to allow late entry to the hall, even extending past midnight.