Time for some light entertainment(1/5) 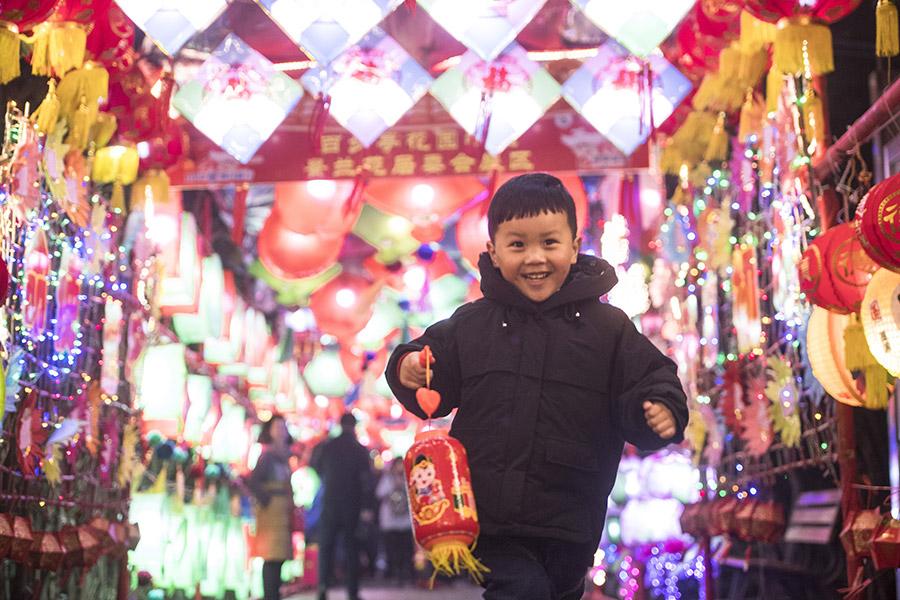 A boy runs happily in a corridor lit up with lanterns to celebrate Lantern Festival in Baibuting community, Wuhan, Hubei Province, in March 2018. (PHOTO/XINHUA)

As the first full moon of the new year approaches, China prepares to celebrate Lantern Festival.

Lantern Festival, or yuanxiaojie in pinyin, which comes on the 15th day of the first lunar month, is the first festival after the celebration of Lunar New Year in China.

The tradition dates back to more than 2000 years ago-during the Han Dynasty (206 BC-AD 220) when Buddhism was flourishing in China. Emperor Ming of the Eastern Han Dynasty (25-220) ordered that lanterns be lit in the imperial palace to worship and show respect for Buddha.

During the reign of Emperor Yang of the Sui Dynasty (581-618), a large-scale gala with thousands of people was held over the course of the night to celebrate Lantern Festival.

The tradition of lighting lanterns gradually became a civilian activity, and the lanterns are now made into different sizes, shapes and colors-but all have good wishes for the new year. 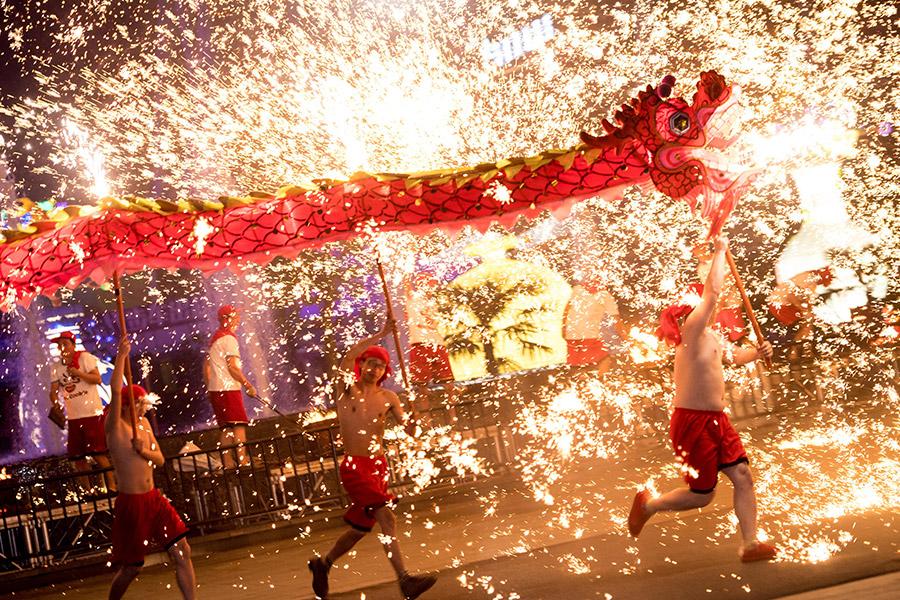 A local troupe performs a fire dragon dance in a shower of molten iron sparkling like fireworks at the Wuhan Happy Valley amusement park in February 2018. (Photo/XINHUA)

This year's Lantern Festival arrives on Tuesday. Besides being a time for families to gather once more, in the old days it was also the Chinese "Valentine's Day". In feudal society, most young women were not allowed to leave the house, but on Lantern Festival, all people could go out into the streets for the whole night to see the lanterns-it was a good opportunity for men and women to meet and fall in love.

Named yuanxiaojie, eating yuanxiao (glutinous rice balls with different fillings) is the most indispensable tradition during the day. While yuanxiao is made and eaten in northern China, people in southern China prefer to eat tangyuan, a similar food, but with a different preparation.

To make yuanxiao, the fillings are made and cut into small blocks first, and then tossed on a sieve with glutinous rice flour until it shapes itself into a ball. 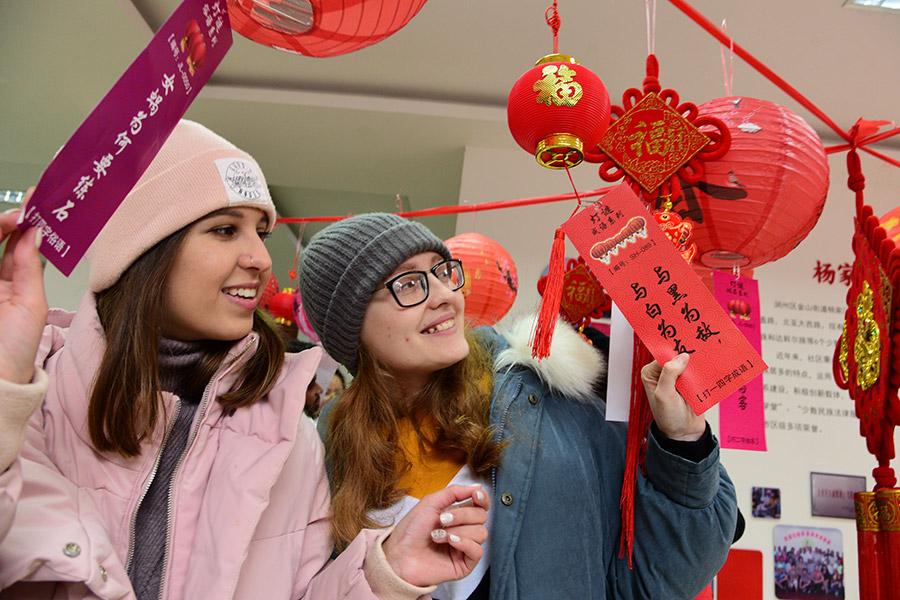 The making of tangyuan is more like making dumplings-the glutinous rice flour dough is molded into round wrappings and fillings are put inside before they are rolled into balls.

Both yuanxiao and tangyuan have similar sweet-flavored fillings, such as red bean paste, black sesame and crushed peanuts. But tangyuan also has savory fillings, including preserved vegetables with pork and mushroom.

Liu Yang, executive chef of Huaiyang cuisine restaurant, Youyuan Jingmeng, who is also a native of Yangzhou in Jiangsu province, remembers when he was a child, each family made their own savory tangyuan with shepherd's purse (a spring seasonal wild vegetable) and pork fillings.

Yuanxiao or tangyuan are both usually boiled and eaten with soup, but the soup is a bit different-the tangyuan soup is usually clear, and the yuanxiao soup is often opaque.

In northern China, there's another way of cooking yuanxiao-frying. The trick is to fry it without causing the filling to burst out. To do that, the oil needs to be 70-percent-hot oil and the yuanxiao should be fried for 30 seconds. Stab several small holes in the surface, and fry them again for four to five minutes to ensure a crispy crust. 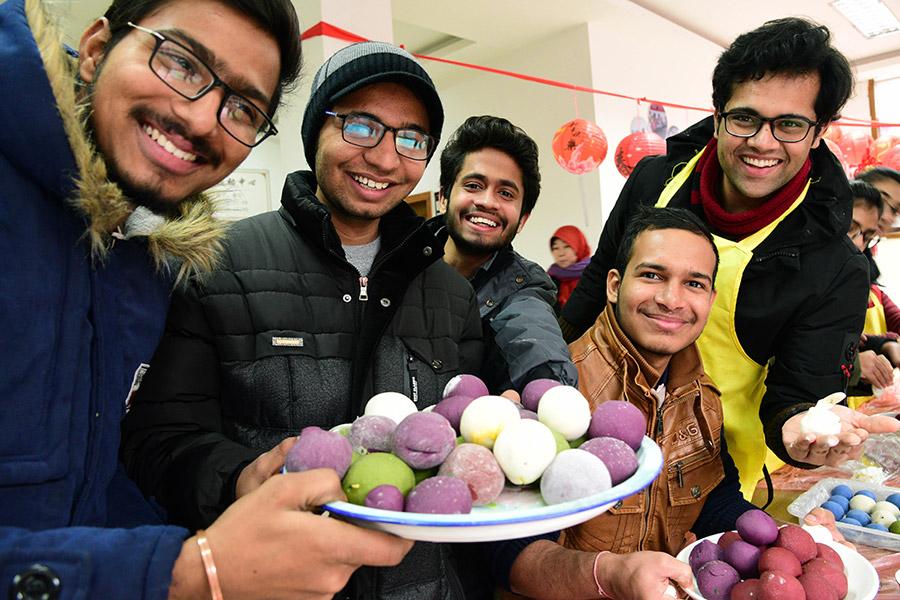 According to Zhao Guangyou, executive chef of Beijing cuisine restaurant, J&E Mansion, there is yet another traditional way of cooking yuanxiao in northern China-by boiling the yuanxiao in fermented glutinous rice soup and adding preserved fruit before seasoning with sweet osmanthus blossom honey.

Traditionally, the lanterns will be taken down on the 18th day of the first lunar month, and with the removal of the lanterns, the yuanxiao also disappears, and a year will pass before they are tasted once more.

However, in recent years, new versions of tangyuan are being created by Chinese chefs, so that diners can enjoy this delicacy all year round.

As well as eating yuanxiao, appreciating lanterns is the essential part of celebrating the festival. Many cities will host lantern fairs in their parks and open spaces.

In northern China, instead of the regular paper lantern, people used to make ice lanterns of different shapes and sizes to hang outside each family's door. They're best made from purified water, so that the ice is perfectly transparent, with no bubbles, before putting a candle inside. 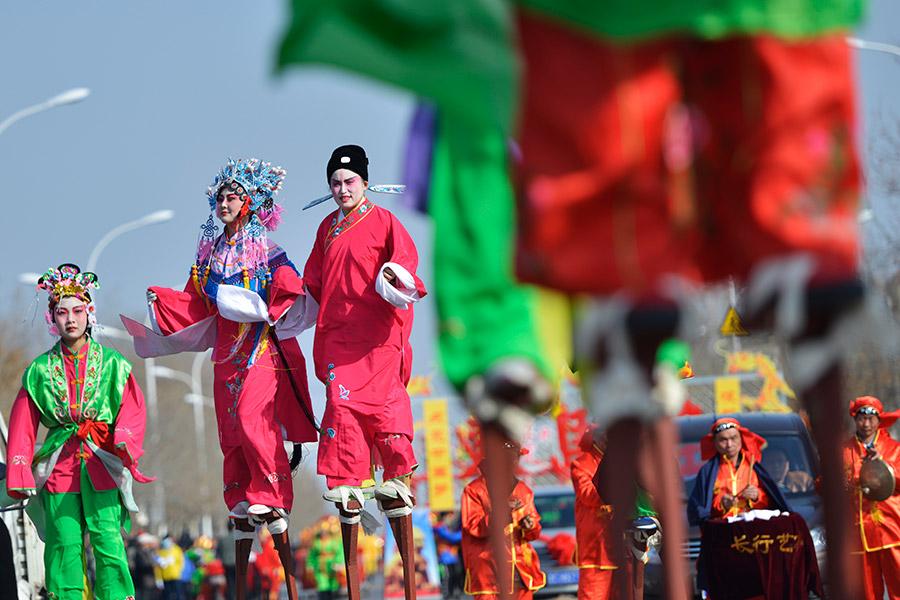 These days, though, ice lanterns have become larger in size and are often combined with elaborately engraved designs, and the candle has gradually been replaced by a light bulb and, in some cases, even laser lights. The shapes range from small animals, like rabbits, to representations of large structures, such as city walls. The ice engraved lanterns are becoming a folk art all of their own.

Solving lantern riddles is another Lantern Festival tradition. The riddles are written one by one on separate slips of red paper and pasted under the lanterns-the right answer will win a gift for the bright mind who solves the puzzle.

Named yuanxiaojie, eating yuanxiao (glutinous rice balls with different fillings) is the most indispensable tradition during the day. While yuanxiao is made and eaten in northern China, people in southern China prefer to eat tangyuan, a similar food, but with a different preparation.

To make yuanxiao, the fillings are made and cut into small blocks first, and then tossed on a sieve with glutinous rice flour until it shapes itself into a ball.)) ?>"/>