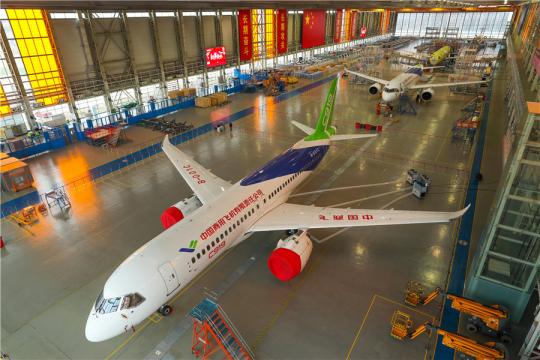 Three C919 aircraft at the Shanghai base of Commercial Aircraft Corporation of China. (Photo by Zhang Haifeng/For China Daily)

COMAC says preparations for mass production will also be accelerated

C919 aircraft manufacturer Commercial Aircraft Corporation of China (COMAC) said that a further three prototypes of the aircraft will have their debut flights this year, and preparations for mass production of the nation's first homegrown narrow-body passenger plane will also be accelerated.

According to COMAC, three C919 aircraft are undergoing testing at the C919 assembly workshop in Shanghai's Pudong New Area－the second, third and the fourth prototypes of the C919, China Central Television reported on Wednesday.

The 102 prototype test aircraft completed its first flight in December 2017. It has recently returned to Shanghai from Dongying in Shandong province, and on Friday started two to three months of modification for a future test flight.

The 103, which had its maiden flight on Dec 28, and is undergoing flight test modification for the moment, will fly to Yanliang near Xi'an in Shaanxi province, where the Chinese Flight Test Establishment is located, for further flight tests.

"The 104 aircraft has entered the final assembly stage. The jet is about to make its first flight after rolling off the final assembly line," said Meng Jianxin, deputy director of the C919 division under Shanghai Aircraft Manufacturing Co Ltd, COMAC.

According to Meng, the 105 jet is in the process of part fabrication, and major parts of the 106 model are being manufactured in accordance with the plan.

"All of them will have flight tests by the end of this year," said Meng.

With the participation of another three new prototypes, a total of six C919 aircraft, including the 101, will be assigned different tasks to test the C919's flight performance.

"The year 2019 is key for the C919, and it is hoped that we can further optimize the flight tasks, enhance flight test efficiency, and complete all the tasks safely," said Lai Peijun, a flight test engineer with COMAC.

The aircraft's first flight only mark the beginning of their journey, and every flight made will provide technical support for a more steady flight the next time.

"There are quite a few test flight subjects that need to be accomplished before a commercial aircraft model acquires airworthiness certification, and it is necessary to split the tasks among five or six aircraft," said Lin Zhijie, an aviation industry analyst and columnist at carnoc.com, one of China's biggest civil aviation websites.

Lin said it is also an international convention for five or six aircraft to work together to complete a commercial aircraft model's flight tests. Chinanews.com reported that the C919's flight tests will include 729 items and may take as long as 4,200 hours.

The twin-engine, single-aisle C919, which is comparable with the updated Airbus 320 and Boeing's new generation 737 planes, made its maiden flight on May 5, 2017.

COMAC has received 815 orders from 28 Chinese and overseas companies, which include domestic aviation companies and financial leasing companies, as well as international companies such as GE Capital Aviation Services, the largest commercial airline leasing company in the world, German startup Puren Airlines, and City Airways of Thailand.

Before the delivery of the first C919, two key missions need to be fulfilled, to receive airworthiness certification from the US Federal Aviation Administration and the European Aviation Safety Agency, and to continuously improve its safety, reliability and economy, according to Lin.

"The former will guarantee entry to the US and European markets, and the latter is a guarantee for our homegrown aircraft to have most problems settled before its commercial flights," he said.