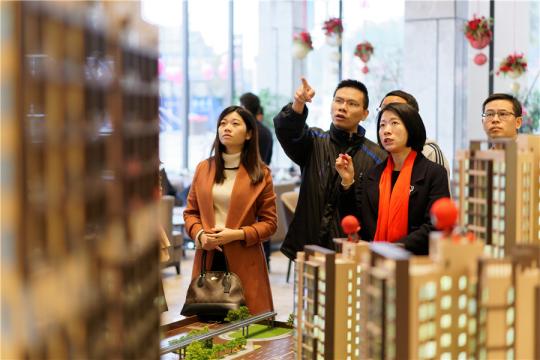 Experts said the Spring Festival holiday was the major factor behind the significant drop in property sales performance nationwide in the first month of 2019 and did not necessarily represent a negative market trend for the industry.

According to Centaline Property Agency's research, in January property sales declined by 38 percent year-on-year in the first-tier cities of Beijing, Shanghai, Guangzhou and Shenzhen.

Among the four cities, Guangzhou saw the most dramatic decrease of 65 percent year-on-year, followed by Beijing, where home sales dropped by over 40 percent.

Third and fourth-tier cities accounted for most of the sales, but these had also slowed down compared to the same period in 2018. Zhang Dawei, chief analyst at Centaline, said the lack of enthusiasm from buyers was caused by the overheated market during last year's Spring Festival.

"During the Spring Festival in 2018, housing prices in first and second-tier cities suddenly increased, triggering price rises in lower-tier ones too," said Zhang. "Back then, buying properties in one's lower-tier hometown became a trend."

He said the buyers assumed the housing price in January would remain at a high level as in 2018.

Xie Yifeng, president of the Realty Association of Asia-Pacific Cities, said the sliding sales in January were due to seasonal factors and should not be regarded as a market trend.

"The Spring Festival was the main reason," he said. "Property developers were not passionate about selling new projects during the holiday, and it was not very realistic for banks to release housing loans before or during the holiday."

In fact, Xie predicted the market in 2019 would be better than last year, as he said the real market indicators were the rising land prices and the amount of land sold.

"The decisive factor is the government's decision on the shantytown redevelopment policy," he added, pointing out that this was expected during this year's session of the National People's Congress in March.

Zhang Bo, chief analyst at the 58 Anjuke Institute, said apart from buyers being skeptical toward the price, the weakening intention for speculation was another factor contributing to the slow sales in lower-tier cities.

"Instead of buying houses for investment, more people are now only buying houses to improve their parents' life or save a spot in their hometown," Zhang said.

Due to seasonal factors such as the holiday, property developers have also slowed down the pace of releasing new properties. For example, in January only around 1,800 new houses were put on the market in Shanghai, compared to 9,000 in December.

Yan Yuejin, director of Shanghai-based E-house China Research and Development Institution, said such phenomenon was rather normal, as January was not a peak season for sales or supply.