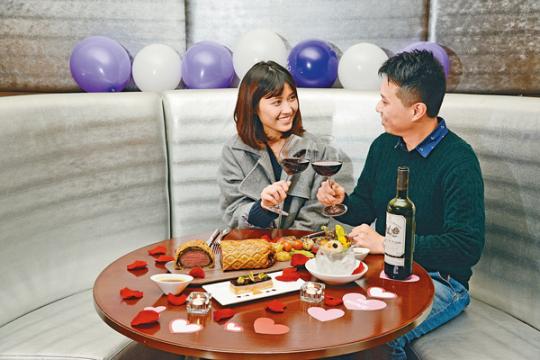 Two young people enjoy a candle-lit dinner together in a restaurant in Hong Kong. (Photo provided to China Daily)

It was "unconventional" to have romantic relationships when Hu Yue was in university in the 1980s. "There was no education about relationships," says the head of the psychological counseling center at Dalian University of Technology in Northeast China's Liaoning province.

"Society was still traditional. People who fell in love tended to keep it secret."

But it's commonplace for youth to openly engage in romance today.

And a growing number of young people are hoping to learn how to handle the ups and downs and ins and outs of love.

Every time 21-year-old college student Wang Yinuo uses the popular Chinese video-sharing site Bilibili, she checks the account of XujieMrXu to see if its operator, 24-year-old Xu Jie, has posted another video.

Xu is an entrepreneur and part-time lecturer on PowerPoint presentation creation and public speaking at his alma mater, Nankai University.

His videos about dealing with relationships have won him 118,000 followers on Bilibili since he started posting them in July 2017.

Bilibili recommended Xu's videos to Wang, so she started to follow Xu because she wanted to know how to approach her crush.

Xu decided to make the videos when he noticed that many single women in their late 20s wanted relationships but didn't know how to go about it.

"They were successful in their careers but made foolish mistakes in their relationships and were even badly hurt due to their inexperience," he says.

"I want to tell them what men usually think of relationships and offer suggestions based on my and my friends' experiences. I hope to share more firsthand knowledge to help people dealing with confusion."

About 79 percent of Xu's followers are women, and 52 percent have never had a boyfriend or girlfriend.

The two most popular of his 99 videos are How to Know If a Guy Likes You and Five Mistakes Women Should Avoid When Attracting Men, with 173,000 and 164,000 views, respectively.

He selects video themes based on questions frequently asked by his fans.

Xu creates the clips in his spare time, "just for pleasure, just because I think they're meaningful and can help others".

He says he doesn't intend to make money from it.

Wang says Xu not only offers good advice but has also influenced her outlook.

"I'm impressed by his idea that engaging in love is only the icing on the cake of life. It's not a solution to a terrible life."

Xu receives many private messages from people asking for advice on their relationship problems.

Xu addresses some in his videos and others during Bilibili livestreams.

"Many fans want answers instantly. So, I livestream when I'm free. I'm obviously limited in my ability to solve their problems, but it's always good to talk about these things."

Peking University instructor Li Tonggui introduced a course about the psychology of love in 2005.

It was initially an elective for psychology majors and then became available to all undergraduates.

The class doesn't deal with tips for managing love but, rather, examines theories about intimacy.

Students apply the theories to characters in books and films.

Class participation is high. Although only 150 students can enroll every year, over 300 attend on their own.