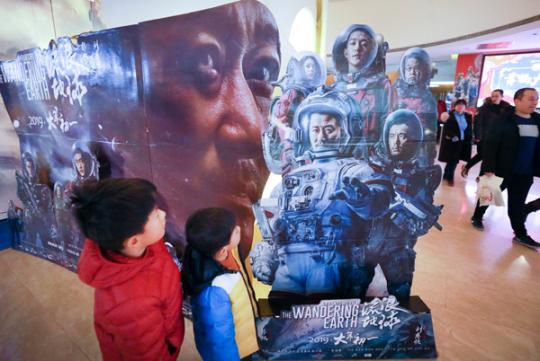 Moviegoers check out a poster promoting the Chinese sci-fi blockbuster The Wandering Earth on Sunday in Beijing. (PHOTO BY ZHU XINGXIN/CHINA DAILY)

China's sci-fi feature film The Wandering Earth was a stellar performer during Spring Festival, raking in 1.9 billion yuan ($282 million) as of Sunday at domestic box offices since it hit cinemas on Tuesday. The film has garnered much acclaim from critics and audiences both at home and abroad.

The Wandering Earth is adapted from a novella of the same name by Liu Cixin, author of the Hugo Award-winningThe Three-Body Problem.

It tells the story of an out-of-this-world plan at an undisclosed future time to use giant thrusters to move our planet, with its remaining 3.5 billion people, 4.2 light years through space to escape annihilation from the dying sun.

According to China Film Critics Association President, Rao Shuguang, films like The Wandering Earth and Crazy Alien, another Chinese sci-fi movie－also loosely adapted from one of Liu's stories－which had made 1.4 billion yuan by Sunday afternoon, "represent the general level of China's film development".

Wu thinks 2019 is "year one" of Chinese sci-fi films. "With 7,000 people taking part in the production of the film, we have educated at least this number of people on how to make sci-fi films," he said at the film's premier on Jan 28.

So far,The Wandering Earthhas recorded a score of eight points out of 10 on Douban, a popular Chinese film and TV rating site, both receiving favorable reviews and sparking discussions on its storyline and effects.

"It fits the Hollywood standard on presentation and visual effects, but the themes of family and love of homeland are characteristic of Chinese sci-fi films," one online review reads.

While many have expressed their excitement to see China's first big step forward in the sci-fi genre, others have found the plot problematic, depictions of characters thin, and lines awkward and redundant. The film has also ignited a heated online debate about what other scientific options the film could have explored to better help the Earth escape its increasingly hostile solar system.

Zhang Shuangnan, a researcher from the Institute of High Energy Physics at the Chinese Academy of Sciences, said he thinks the idea of the film makes for a brilliant sci-fi story. However, he said it is both impossible and unnecessary to stop the Earth from rotating.

The film was also released in theaters across North America, Australia and New Zealand beginning on Feb 8, attracting attention as it is China's first major sci-fi film.

The New York Times said China's film industry has finally joined the space race "amid grandiose expectations that it will represent the dawning of a new era in Chinese filmmaking".

US news and media network The Verge said The Wandering Earth "shows a new side of Chinese filmmaking－one focused on futuristic spectacles rather than China's traditionally grand, massive historical epics".

Last November, a 2018 report on China's science fiction industry was released by the Southern University of Science and Technology in Shenzhen. It said the total China box office for science fiction movies in 2017 was 13 billion yuan, and only around 10 percent of them were homegrown productions.

Wu Yan, who commissioned the report, said he thinks the popularity of The Wandering Earthindicates that the development of China's sci-fi sector is changing from just publishing books to film production, which is a lot more sophisticated, financially and technologically.

Wang Ru contributed to this story.