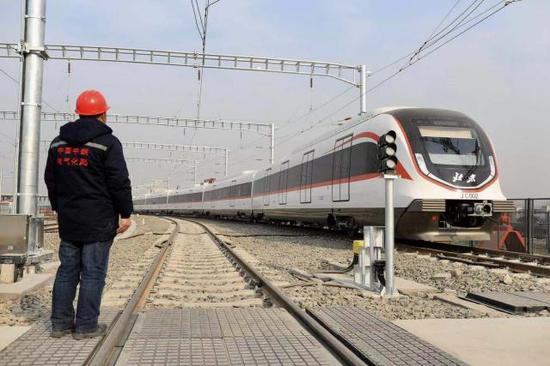 Subway trains designed to run on Beijing's new airport subway line, which links the Beijing Daxing International Airport and Caoqiao subway station in downtown Beijing, made its debut on Tuesday.

The trains are capable of fully automated driverless operation, and with a designed speed of 160 kilometers per hour, they are the fastest subway trains in China. The 40-km journey from Caoqiao station to the capital's new airport will only take 19 minutes. Currently, the travel speed of most subway trains is 80 km/h.

The trains each have a business class carriage, a first in the country. The eight-carriage train, which is about 22.8 meters long and 3.3 meters wide, will be able to carry a maximum of 1,500 passengers.

There are wheelchair spaces and USB charging ports by the passenger seats on the train.

The new subway trains are expected to start trial operation in September, when the Beijing Daxing International Airport is due to open.