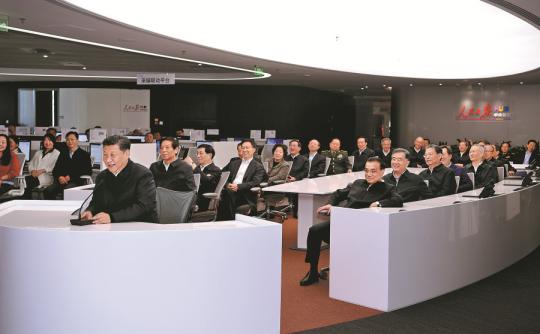 President Xi Jinping, general secretary of the Communist Party of China Central Committee, leads members of the Political Bureau of the CPC Central Committee in learning about the development of media integration at the new media hub of People's Daily on Friday in Beijing. (YAN YAN / XINHUA)

Xi Jinping, general secretary of the Communist Party of China Central Committee, called on Friday for more effort to push for the development of media integration to strengthen the penetration, guidance, influence and credibility of the media.

Xi made the remark at a group study session attended by members of the Political Bureau of the CPC Central Committee at the New Media Center of People's Daily on Friday.

Calling the advancement of integration of traditional media with new media an urgent task, Xi urged media organizations to take advantage of the information revolution to strengthen integration in a bid to enhance representation of mainstream public opinion favorable for the undertakings of the Party and the country.

He called for building a new type of mainstream media that is more influential and competitive, and for improving the guidance of public opinion.

Law-based management of new media must be strengthened to ensure cyberspace that is clean, Xi said.

He said a system of online content management must be in place to ensure media communications are done in accordance with law. This is to safeguard the political, cultural and ideological security of the country, Xi said.

He demanded all-around efforts to build capacity for internet management, regulation of data use and guarding against the risks that new technologies like big data can have.

Xi urged Party committees and governments at various levels to provide policy, capital and human resources support for media integration, and said leading officials should strengthen their capability of communicating with media to keep improving their level of governance.

Before the group study session, Xi and other members of the Political Bureau of the CPC Central Committee inspected new media development at People's Daily and interacted with journalists and staff at the new media center.

The Political Bureau fully acknowledged the work of those organizations in the past year, and also agreed to their work plan this year, according to a statement released after the meeting.

It also called on them to carry out decisions and plans over important tasks of the CPC Central Committee, the statement said.

The meeting urged them to take the lead in upholding the authority and the central and unified leadership of the CPC Central Committee and abandon the practice of bureaucratism and formality for the sake of formality.

The meeting also reviewed three other regulations in Party building and the selection and appointment of leading officials of the Party and government.

It is important for Party organizations at various levels and Party members to have firm political beliefs, step up political leadership, improve their political capacities and purify the political ecosystem, the statement said.