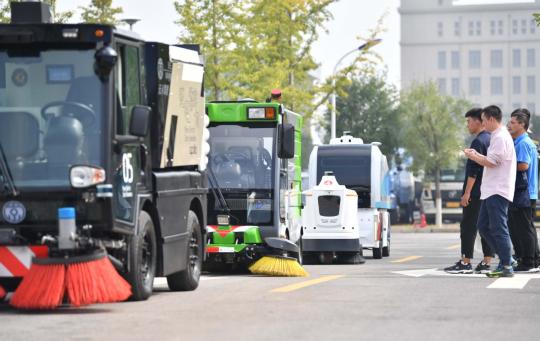 Future of mobility could be a reality sooner than thought, with industrial and civic uses likely to be implemented first

Large-scale commercial use of self-driving technologies could become a reality sooner than expected, as tech companies are promoting their use in public service sectors.

"By leveraging our capabilities in autonomous driving and AI technologies, we can develop comprehensive solutions that will greatly improve the efficiency of cities," said Baidu's chairman and chief executive Robin Li.

He added the year of 2018 marked the first year of commercialization for autonomous driving.

Based on Baidu's Apollo autonomous driving system, the seven vehicles are designed to fulfill various indoor and outdoor tasks, such as sweeping roads or public areas, and collecting and transporting garbage.

The move marks another step by Beijing-based Baidu in applying its autonomous driving technologies to solve real-life problems.

The company plans to launch a fleet of 100 robo-taxis in Changsha, the capital of Hunan province, on 210 kilometers of city roads.

It will be China's first autonomous taxi fleet managed by Baidu's V2X system, which integrates smart vehicles and intelligent road infrastructure for the safe deployment of autonomous cars.

In July, Baidu announced it had launched volume production of the nation's first fully autonomous minibus, the Apolong, in partnership with domestic manufacturer King Long.

It intends to ship the buses to Japan early this year, in cooperation with SB Drive, the autonomous driving-focused subsidiary of Japan's SoftBank Group. The fleets will help to ferry workers to power plants and elderly people around their communities.

The Apolong is outfitted with Baidu's Apollo autonomous driving system and seats 14 people. It can complete self-driving operations such as avoiding obstacles, swerving and transshipment.

The buses will initially offer last-mile travel services at tourist hot spots, airports and other enclosed areas. It is set to enter commercial operation in Beijing, Shenzhen, Xiongan New Area, Wuhan, and Pingtan in Fujian province, among other regions, Baidu said.

The company's Apolong manufacturing facility in Xiamen, Fujian province, has achieved a production volume of 100 units as of July, a milestone that Li said shows autonomous driving is making great strides.

Baidu launched its Apollo platform in April 2017. So far, it has attracted over 130 global partners, and has been used by over 12,000 developers and partners worldwide.

The company has also worked together with Hongqi, a domestic auto brand of carmaker FAW Group, to launch passenger cars with Level 4 autonomous driving capabilities in 2019.

Level 4 autonomy means the car can drive itself in most conditions without human intervention. Mass production of the passenger cars will begin in 2020.

Baidu obtained the license to test its self-driving cars on open roads in Beijing in March, becoming the first enterprise to conduct road tests in designated zones in the capital.

In all, the country has now issued 101 license plates for self-driving vehicles owned by 32 companies across 14 cities, according to China Automotive Information Net. Baidu has obtained the most, with more than 50 plates.

Zeng Zhiling, managing director of LMC Automotive Consulting Co, said he is bullish on the application of self-driving technologies in public service sectors, as bus operating routes are relatively fixed, and personal privacy issues related to intelligent connected vehicles are less of a concern on mass transit.

Traditional car manufacturers are also ramping up efforts to promote the large-scale commercialization of self-driving technologies.

BYD is working on self-driving technologies itself, as well as in cooperation with Baidu.

Tencent Holdings Ltd received its first license from the Shenzhen government in May to test intelligent connected vehicles on designated roads. 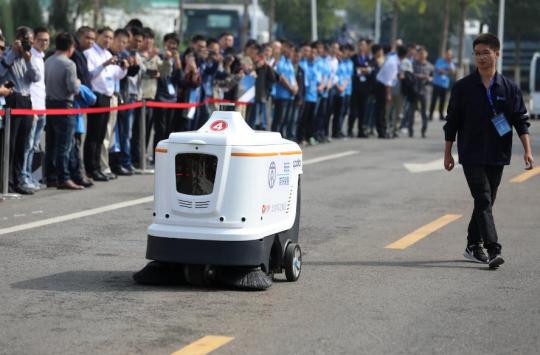 China's autonomous driving is gaining momentum as the government has high hopes for the sector.

The authorities forecast that vehicles with some degree of autonomous functionality will account for half the new vehicles sold in the nation by 2020, according to a guideline released by the National Development and Reform Commission.

To ensure the rapid development of autonomous vehicles, the Chinese authorities have been expediting such guidelines and related regulations.

In April, the nation released a national guideline on road tests for self-driving vehicles, as part of a broader drive to accelerate the development of the technology and gain the advantage in commercializing such vehicles.

The regulation allows local authorities to evaluate local conditions and arrange road tests for autonomous vehicles. It states that the test vehicles should be passenger or commercial automobiles, not low-speed vehicles or motorcycles.

Shanghai has issued seven license plates for five companies to conduct self-driving road tests, namely SAIC, Nio, BMW, TuSimple and Momenta. Two of the five companies have been given a plate for testing autonomous driving trucks.

Apart from Beijing and Shanghai, extensive testing is also taking place in a total of 14 cities around China, including Shenzhen and Guangzhou in Guangdong province, Hangzhou in Zhejiang province, and Chongqing.

According to consultancy Roland Berger, China is accelerating its development of autonomous driving and is expected to become the leader in the technology, which is seen as key to the future of the automotive industry.

However, industry analysts said there is a long way to go before fully autonomous cars are integrated into people's daily lives.

Zeng warned that self-driving vehicles are vulnerable to cyberattacks. Since these vehicles are highly intelligent and networked, there is a possibility that hackers could break into the system and pose a great danger to road safety, he explained.

Zhao Xiang, an analyst with internet consultancy Analysys, said self-driving technologies still face a number of obstacles before being rolled out for commercial use.

She said technological hurdles include the accuracy of digital maps and the high cost of laser sensors used in the self-driving systems.

"Intelligent vehicles with fully autonomous functions may account for 10 percent of the new vehicles in 2020," said Yang Diange, dean of the Automobile Engineering Department at Tsinghua University, estimating that "self-driving vehicles will come into our daily lives in 2030."