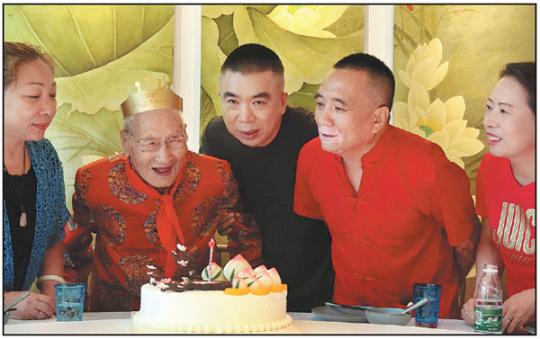 Peng Yunsong can't remember how many times his children have celebrated his birthday in the past year.

"My father has devoted all his life to the family, so we want to give him more happy memories in his old age," said Luan Jingtong, one of Peng's sons. "Every time we decide to hold a family party, we will buy a birthday cake and celebrate around him."

Peng, a 97-year-old retiree in Harbin, capital of Heilongjiang province, has six children with different surnames - none of them Peng.

He began building his family the day he brought an 8-year-old boy home in the winter of 1954, shortly after he move to Harbin from Shandong province for work.

"I still remember it was an extremely cold day, and I found a famished boy dressed insufficiently on my way to work," he recalled.

"I gave him my lunch - a steamed bun - out of pity. However, when I saw him gobble it up, my heart was pierced and I couldn't allow myself to leave him alone."

Over the next 15 years, Cheng brought home another five abandoned children, a girl and four boys, forming a family with seven surnames.

Peng was a gatekeeper at a chemical factory at the time. The family lived in a mud hut that was provided to workers as a changing room and place to rest.

"To avoid my children being looked down on by my colleagues, I volunteered to provide the workers with hot water and help them heat their lunches," he said.

"I didn't want my children to feel unwelcome, as they were really pitiful without parents."

To support the family, Peng took various odd jobs after work, including collecting recyclable items and selling goat's milk at the market. But he still struggled to earn enough money to pay for the children's food and schooling.

"Almost all my friends and neighbors urged me to send them to an orphanage and get married as soon as possible," Peng said.

"I refused. I couldn't make them become orphans for a second time."

He said he had never married because he was "too poor to give anyone a happy married life, and I was also afraid that nobody could give them a real mother's love".

Luan, 58, who runs a chemical company in Harbin, said: "To give us more food, my father had only had one meal a day, and it's a habit that's lasted until today. He didn't eat a dumpling until he was 50.

"Despite the hard life, he never allowed us to drop out of school or help him earn money. Even though we were not able to be undergraduates, we all became men of great integrity, just like our father."

Luan, a successful businessman, has donated more than 8 million yuan ($1.16 million) to public welfare causes over the decades.

He also founded the first volunteer drivers' team in the country in 1999. Its members now include the drivers of more than 1,000 taxis and private cars in the city.

"We provide free services for the elderly, the disabled and those facing an emergency," he said. "My father set a good example for us to contribute to society. He is always considerate to others."

On his 95th birthday, Peng expressed a desire to join the Communist Party of China and later submitted an application.

At a special oath-taking ceremony on Dec 20, he finally realized his dream of becoming a Party member.

"We were all moved when we received his handwritten application," said Zhao Yuanyuan, the Party secretary for Harbin's Central Avenue community.

"He is a respectable senior, so we accepted his application and held the ceremony for him."

Peng said: "It has been a dream since my youth, but it was impossible to realize because I was busy surviving. Now I have lived a good life, so it's time to fulfill my dream. It is never too late."