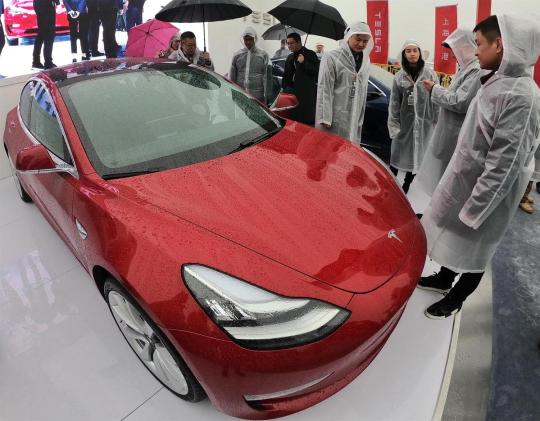 A Tesla Model 3 electric car is displayed at a ceremony to start the building of Tesla's manufacturing plant in Shanghai on Jan 7.(Photo/China News Service)

China plans to further promote its opening-up this year by granting more access to foreign investors in a number of sectors and eliminating joint-venture requirements, according to the nation's top economic regulator.

These industries will include agriculture, mining, manufacturing, telecommunications, education and medical care, Meng Wei, spokeswoman of the National Development and Reform Commission, said on Tuesday.

"The NDRC is working with a number of departments to clear up the restrictions on foreign investment that are not on the negative list. We will make sure that domestic and foreign standards for market access are consistent," Meng said.

Earlier in December, the NDRC published a new negative list that specified industries where investors are restricted from participation. Of the 151 sectors on the list, only four are prohibited and the rest require government approval. Industries not on the list are open to all investors.

She added that the government welcomes foreign investors' participation in China's efforts to upgrade its manufacturing sector.

Forthcoming moves removing restrictions on foreign investment are expected be introduced not only in more developed eastern regions such as Shanghai, but also in less developed regions according to local economic development, said a NDRC official who has knowledge of the matter.

Some moves at local level for foreign investment have been in the pipeline.

For instance, the local government in Shenyang, a manufacturing powerhouse in Liaoning province, will establish a government-backed fund and guide more money to support enterprises in the Sino-German Intelligent Equipment Manufacturing Park.

The park is part of China's efforts to combine local manufacturing strengths with investment and more advanced techniques to improve the region's economic restructuring process.

Bai Ming, a researcher at the Chinese Academy of International Trade and Economic Cooperation, said Chinese enterprises should take the nation's further opening-up as an opportunity to upgrade and be prepared to face challenges brought by foreign firms seeking access to the domestic market.