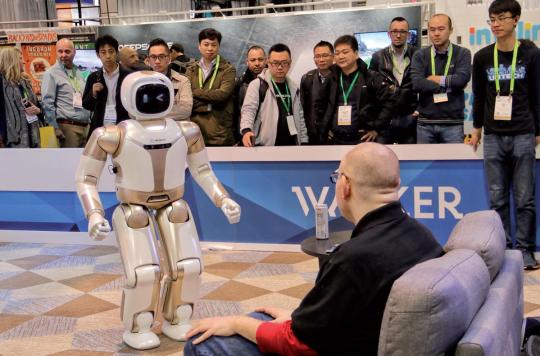 11China's UBTech Robotics displays its latest Walker humanoid robot, which "blinks" to attendees after a successful delivery of a drink to its "owner". It was one of Walker's many capabilities demonstrated at CES 2019 on Tuesday in Las Vegas. (JUDY ZHU / CHINA DAILY)

A little robot designed to "nurture people's capacity to love", along with a dog that does tricks are softening up audiences at CES 2019.

Loaded with advanced technology such as "Emotional Robotics" and touch sensors throughout its frame, the little robot waves its arms and demands to be picked up and cuddled.

There are 27 percent more robotics companies participating in CES this year than last, according to the Consumer Technology Association.

The dog is designed to connect with its owners on an emotional level, said Mike Fasulo, president and COO of Sony Electronics North America. Aibo has already sold out in the U.S., according to a representative at the Sony booth.

Not all the robots are cute and cuddly — some are all business.

An autonomous mobile robot now being used by Chinese e-commerce giant JD made its North American debut. The AMR X150 by Chinese startup ForwardX Robotics is an intelligent warehousing robot capable of carrying 220 pounds, with a top speed of 5 feet per second and 10 hours of operation per battery charge.

"Our robots are smarter because they have smart brains with perception, cognition, judgment and decision-making capabilities," Nicolas Chee, founder and CEO of ForwardX, told China Daily.

The Beijing-based firm also launched two additional robot platforms at CES, starting with Ovis, a smart suitcase with built-in "eyes" that scan its surroundings, navigates obstacles and always keeps its owner in sight. A quickly activated manual mode makes tackling stairs or an escalator a breeze. A wearable band alerts the owner if the robot gets hung up and falls behind.

ForwardX Robotics also rolled out an autonomous lawnmower that uses computer-vision sensors as it cuts the grass.

Fred Fishkin, a consumer tech reporter for Techstination in Jackson, New Jersey, said he was impressed with the Chinese gadgets.

"The smart suitcase that follows you everywhere. There was certainly a lot of Chinese innovation going on here," Fishkin said. "There is a lot to be impressed about when it comes about technology coming from China."

Chinese firm UBTech last year unveiled a walking robot called Walker. At this year's show, UBTech is demonstrating a new version of Walker, one with a torso and arms.

At a demo area encircled by excited visitors, Walker opened the door to welcome its owner, picked up the umbrella from the owner's hand and put it aside, and smoothly moved back to grab a drink from the refrigerator and handed it to the owner, who was sitting on a couch.

"UBTech is on a multiyear mission to bring robots into every home and business by making them more intelligent, personal and humanlike in every way," said John Rhee, senior vice-president and general manager, North America.

UBTech Robotics has nearly $1 billion in funding on a $5 billion valuation.

"Chuangchuang", another personalized emotional robot with sense and vision from the Chuangze Intelligent Robot Co Ltd was a winner of a CES 2019 Innovation Award, the only commercial intelligent-service robot to win.

"Chuangchuang" is the first in China with a so-called "brain" and "cerebellum" that could quickly acquire professional knowledge of various industries and become an expert, the company said.

The market for service robots is more than just animatronic pets and futuristic home servants. It is a $39 billion industry that is expected to grow to about $500 billion by 2025.