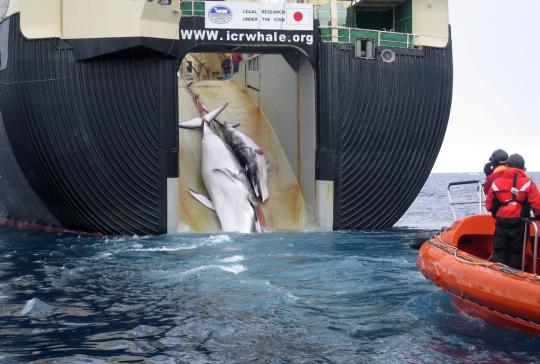 Japanese whaler killed two whales and dragged them into the ship. The photo was released by Australia in February 2008. (Photo/XINHUA)

Japan announced last week that it would begin commercial whaling "within its own exclusive economic zone" in July, after its exit from the IWC is formalized on June 30. And it would stop whaling in the Antarctic Ocean next summer.

Japan halted commercial whaling in 1988 because an IWC moratorium was adopted in 1982. But the country has carried out whaling in waters such as the Northwest Pacific and Antarctic Ocean in the name of "scientific research". Anti-whaling countries have called this a cover for commercial whaling. The IWC voted down Japan's proposal to resume commercial whaling by 41 to 27 at an annual meeting in Brazil in September.

Japanese Prime Minister Shinzo Abe's electoral power base is in Shimonoseki, Yamaguchi prefecture, a city known as a former whaling hub. The ruling Liberal Democratic Party secretary-general Toshihiro Nikai's electoral district in Wakayama prefecture includes the town of Taiji-the birthplace of traditional whaling and still a hub for the industry. Nikai has long pushed for a return to commercial whale hunting.

Taiji has become internationally known since the Oscar-winning US documentary film The Cove, which criticizes the town's fishing industry for capturing and killing dolphins in drive hunts, where whales and dolphins are driven into coves to make it easier to kill them, was released.

Anti-whaling groups have frequently protested in the small town. More demonstrations are expected there and other whaling areas in Japan when commercial whale hunting starts.

Whale hunting has a centuries-long culture along Japan's coastlines.

"I don't see many whale restaurants or a lot of whale meat, and don't hear friends or colleagues demanding more of it," said Michio Kato, an elderly resident of Tokyo.

"Lots of Japanese 'traditions' have been allowed to lapse over the passage of time. Why they cling so resolutely to this one is a mystery," Kato added.

Experts in Japan are concerned about the damage the IWC exit could do to the country's image, similar to the criticism the United States has faced for withdrawing from international frameworks such as the Paris Agreement on climate change.

In an interview with the Japan Times, Yuichi Hosoya, professor of international politics at Keio University, called Japan's decision "symbolic of a wave of populism spreading over the world". He added that it will make an international consensus on various issues, including Brexit, difficult.

Yasuhiro Sanada, a researcher at Waseda University in Tokyo, called the decision to leave the IWC a "diplomatic failure", which has invited international condemnation.

In a statement issued on Dec 26, Sam Annesley, executive director at Greenpeace Japan, called for Japan to act to conserve marine ecosystems, rather than resume commercial whaling.

He said Japan's decision is "out of step with the international community, let alone the protection needed to safeguard the future of our oceans and these majestic creatures".

"As a result of modern fleet technology, overfishing in both Japanese coastal waters and high seas areas has led to the depletion of many whale species. Most whale populations have not yet recovered, including larger whales such as blue whales, fin whales and sei whales," Annesley said.

The world's oceans face multiple threats such as acidification and plastic pollution, in addition to overfishing. "As a country surrounded by oceans where people's lives have been heavily reliant on marine resources, it is essential for Japan to work toward healthy oceans. Japan's government has so far failed to resolve these problems," he added.

British Labour Party leader Jeremy Corbyn tweeted that the Japanese government must urgently reverse its decision. "It is a travesty to allow commercial whaling to restart. We need to enhance international cooperation to protect our oceans and their creatures," he said.

Japan waited until the end of the year to announce the move, concerned that it could affect a new economic partnership agreement with the European Union, many of whose members oppose whaling. The domestic ratification processes for both sides were completed on Dec 20.

But Japan's international image remains at risk. Abe could face protests during his planned visit to Britain in January, the Nikkei Asian Review said.

Some Japanese consumers and wholesalers of whale meat don't think that Japan needs to increase the volume of catches at the cost of being isolated internationally.

The demand for whale meat, which was consumed as a source of cheap protein especially immediately after 1945, has dropped due to changes in the Japanese diet over the past few decades. Whale meat was widely consumed amid food shortages in the years following World War II and was a feature of school lunches. In 1962, some 230,000 tons of whale meat were eaten.

Annual whale meat consumption hovers around 5,000 tons, or merely about 0.1 percent of all meat consumption, in recent years due to international regulations on whaling and major supermarkets refraining from selling the meat in fear of attacks from anti-whaling groups. Meat from Japan's so-called scientific whale hunting is sold in food markets or given away free or at low costs to schools and hospitals in marketing drives to encourage the consumption of whale meat.

The Japanese whaling fleet departs twice a year. In the North Pacific, Japanese whalers can kill up to 200 minke whales, 50 Bryde's, 100 sei whales and 10 sperm whales under the guise of scientific research, according to the International Fund for Animal Welfare.

Some other countries, such as Norway and Iceland, are also whaling.