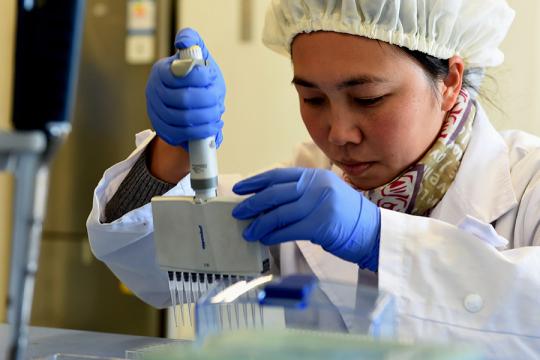 A researcher tests a new vaccine product at a research laboratory in Kunming, Yunnan province. (Photo/Xinhua)

Patients to benefit as breakthroughs take less time to come to market, while increased competition helps to lower costs

China is approving foreign drugs at a record speed, which industry sources said shows the country's commitment to further opening up its healthcare sector and supporting innovation.

Since 2016, the country has adopted a series of policy amendments to speed up new drug approvals, as part of its widespread reforms in healthcare, opening-up, and improving market access.

A statement issued after the annual Central Economic Work Conference in December said China will work to promote technological innovation and foster new industrial clusters, and build a unified and open market system with orderly competition.

It also said that micro market entities will be further motivated and energized, with the establishment of fair, open and transparent market rules and a law-based business environment.

"China is opening up its lucrative pharmaceutical market to the outside world with a determination never seen before," said Liu Guoen, an economist and healthcare reform specialist with the National School of Development, Peking University.

"The accelerated approval and a more open market are good for everyone," he added.

More than 100 foreign-developed drugs were approved for the Chinese market in 2018, according to a report released in December by global management consulting firm McKinsey and Co.

In another report released in May 2018, the consulting giant described the reforms as being "in full stride" and said there would be "a tsunami of new-product launches expected".

It observed a record number of approvals and new product launches in 2017: a total of 37 new products versus a mere five or six between 2014 and 2016.

By the end of 2017, it found that some 180 candidates had been granted priority review status, each of which would be gearing up for launch in the coming years.

China was the world's second-largest national pharmaceutical market in 2017－worth $122.6 billion, after the United States, and also the biggest emerging market for pharmaceuticals with growth tipped to reach $145 billion to $175 billion by 2022, according to healthcare information company IQVIA.

Quickened approval for new drugs and the further opening-up of the Chinese market promises a faster and better supply of cutting-edge medicines to Chinese patients, who in the past often waited for years for new drugs developed by foreign companies, after they first launched in other markets, according to Liu, who is also member of the State Council's healthcare reform advisory committee.

Such changes provide great growth opportunities to both domestic and multinational pharmaceutical companies, with foreseeable hikes in revenues, as new drugs are launched into China, said Liu.

In his opinion, multinational pharmaceuticals would get greater benefits than domestic ones, because of their leading position in innovation and new treatment research and development.

Meanwhile Chinese local firms, especially traditional drug makers, often rely on generics for a large share of sales and revenues, and lag behind in developing new drugs, he noted.

Shi Lichen, an industry analyst and founder of Beijing Dingchen Medical Consultancy, said such a situation is good for the domestic pharmaceutical industry in the long run.

Chinese companies will have to invest generously into innovation to forge their R&D abilities, now that they have to compete in a fair market that is competition-driven and innovation-focused, where fast approval will bring an increasing number of drugs approved, he explained.

A variety of the world's big pharma firms have applauded the easing market access.

Novartis AG said in the past two decades it has received approvals for 44 innovative drugs from the National Medical Products Administration (formerly the China Food and Drug Administration).

In 2017, 10 of the company's drugs were included on the national medical insurance list. In 2018, four of its cancer treatments were added to the national cancer therapy insurance program.

United Kingdom-based Astra-Zeneca PLC has been another drugmaker to benefit from faster approval times, via the priority review pathway. In March 2017, China greenlit the firm's lung cancer pill Tagrisso, just 15 months after it was approved in the US－a record for recent years.

Last month, China became the first country to approve Roxadustat, a first-in-class treatment for anemia caused by chronic kidney disease in patients who are dialysis-dependent, co-developed by AstraZeneca China and FibroGen China.

Fast approval helps patients gain easier access to high-quality healthcare, and also signifies China's pledge to further open up its market to foreign companies, she said, adding the Chinese market is now one of the most attractive markets in the world.

China is already the company's second-largest market, she said, observing the Chinese healthcare industry today encourages innovation, and focuses on quality and efficiency.

The company plans to bring 10 innovative medicines to China in the next seven to eight years.

It also aims to get approval in China simultaneously to other countries and regions, so that Chinese patients will have timely access to its medicines.

Miao Zhongrong, a top expert in cerebrovascular disease at Tiantan Hospital in Beijing, said the fast approval and easing of Chinese market access is definitely good for patients, who can have access to more new drugs at relatively lower prices, especially for cancer treatment.

However, he said a speed up review and approval of new drugs should not be at the cost of a drop in drug quality.