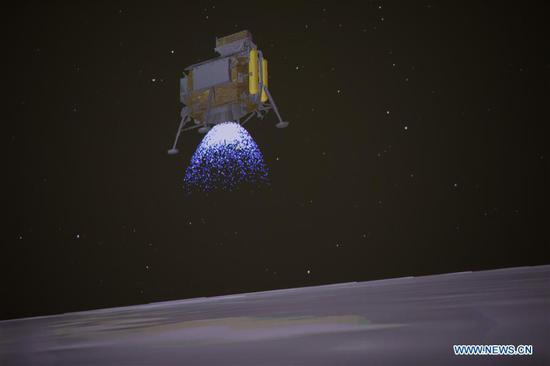 A simulated landing process of Chang'e-4 lunar probe is seen through the monitor at Beijing Aerospace Control Center in Beijing, capital of China, Jan. 3, 2019. (Photo/Xinhua)

A new chapter opened in mankind's exploration of the moon on Thursday morning as the first probe to land on the moon's far side reached its destination after a 26-day journey.

The Chang'e 4 lunar probe, representing China's latest step in lunar investigation, landed at 10:26 am at the Von Karman crater in the South Pole-Aitken basin and then sent back three photos of the landing site shot by cameras on the probe's lander, marking the world's first images taken on the surface of the far side.

One of the photos, published by the China National Space Administration, shows the place where Chang'e 4's rover, which was named Yutu 2 on Thursday night, will be heading to explore and survey.

Thus began the first expedition to the side of the moon that faces away from the Earth. It is meant to fulfill scientists' long-held aspiration to closely observe the lesser known region.

Tidal forces on Earth slow the moon's rotation to the point that the same side always faces Earth. Most of the far side is never visible from Earth.

While it has been extensively photographed by spacecraft, starting with a Soviet probe in 1959, no probe had ever made a soft landing there, so scientists had not been able to conduct surface-level observations and surveys of the region.

According to the China National Space Administration, Chang'e 4's landing procedure started at 10:15 am, when it began its descent from an orbit 15 kilometers above the surface, following control signals from the Beijing Aerospace Control Center transmitted through China's Queqiao relay satellite.

The probe made position adjustments when it reached 6 to 8 kilometers above the moon. The descent then paused at about 100 meters above the surface as the spacecraft analyzed the gradient of the preset landing site as well as any possible obstacles in order to avoid hazards.

After an exact landing area was determined, Chang'e 4 resumed its descent at a slow velocity and finally touched down, the administration said in a statement. 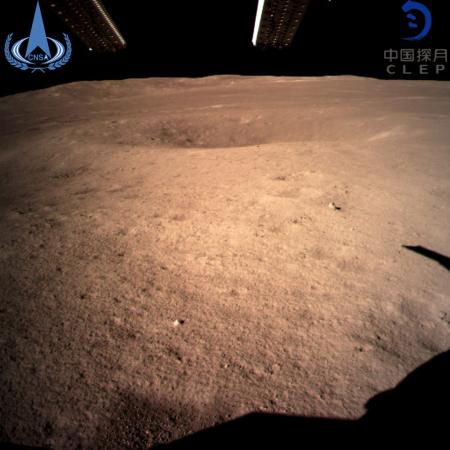 The first closeup image ever taken of the far side's surface, photographed by the lunar lander, shows the route planned for the rover. XINHUA

Shortly afterward, the probe unfolded its solar arrays and antennas and established a high-speed data link through Queqiao, it said.

Wu Weiren, chief designer of China's lunar program, said in Beijing on Thursday after the landing that the descent and landing "were perfect".

He called the event "an important milestone for China's space exploration", adding that it has made a good start for future lunar exploration efforts.

With its investigation of the far side, particularly the Von Karman crater, the Chang'e 4 mission will enable scientists to find out what they haven't known about the moon and deepen their knowledge of its early history and of the solar system.

Researchers also can use the far side's shield against Earth's interference to make clearer observations into deep space, scientists expect.

Zhang He, executive director of the Chang'e 4 program at the China Academy of Space Technology, said, "As there had been no probe on the far side before us, all scientific information obtained by the Chang'e 4 will be new to the world."

Next, Chang'e 4 will start testing and fine-tuning its equipment under control from the Beijing Aerospace Control Center and will wait for suitable conditions to release its rover, officials said.

Chang'e 4 was launched atop a Long March 3B carrier rocket on Dec 8 at the Xichang Satellite Launch Center in Sichuan province.

Developed by the China Academy of Space Technology, the probe has two parts: a lander and a rover. It is the fourth lunar probe China has launched since the country's lunar program began in 2004.