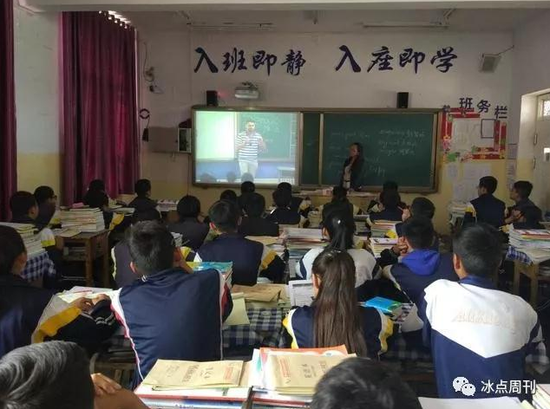 Luquan county in Kunming, capital of Yunnan province, is a State-level poverty-stricken county dozens of kilometers away from Kunming. Due to proximity to the provincial capital, all eligible students find a way to go to a high school in Kunming, with those left behind mostly have poor academic performance.

Then the vicious cycle begins. The school performs badly in college entrance exam and in turn gets academically poor students.

At first, the freshmen of Luquan high school found it difficult to catch up with classes in Chengdu. Wang Yiqing, top student in her town's high school entrance exam, failed all mid-term tests except Chinese language. She could not understand the English courses except for the three-minute English song before the class began.

This was the case for most students in livecast classes. After tests, the classrooms had students in tears.

The livestream also met with setbacks from teachers at first, with teachers feeling looked down upon. Some teachers tore textbooks in protest, others came late to class or asked for a whole week leave and told students to watch livestream themselves.

With students performing better and better, the school began attracting the 12 students who had been enrolled by a Kunming school. After more than a decade, Luquan for the first time saw the return of good students.

With education improving and students coming back, some parents also returned. The county is kind of revitalized. Even the housing prices have risen, according to a local official.