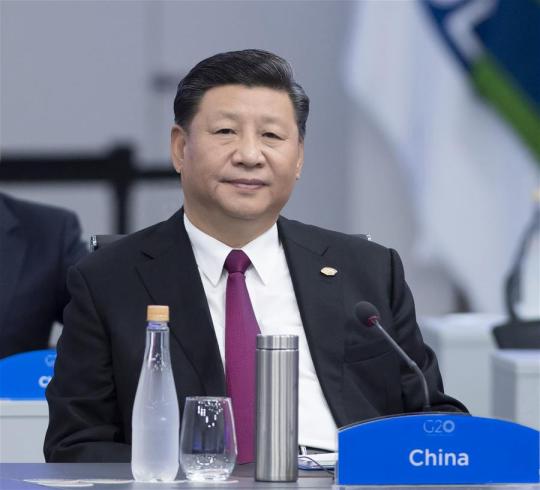 The 13th summit of the G20 is held in Buenos Aires, Argentina, Nov. 30, 2018. President Xi Jinping delivered a speech titled "Look Beyond the Horizon and Steer the World Economy in the Right Direction" at the first session of the summit. (Photo/Xinhua)

International experts applauded President Xi Jinping's speech at the G20 Leaders' Summit for promoting multilateralism, global cooperation and free trade at a time when the world is facing a surge in unilateralism and protectionism.

Addressing the first session of the 13th G20 summit in Buenos Aires, the Argentine capital, on Friday he also urged commitment to innovation to create new momentum for growth and to win-win cooperation to promote inclusive global development.

"Facing various challenges, we must have a stronger sense of urgency, be rational in approach and look beyond the horizon. We must fulfill our responsibility and steer the global economy in the right direction," said Xi, who was attending a G20 summit for the sixth time since his first in St. Petersburg, Russia, in 2013.

Luigi Gambardella, president of the Brussels-based ChinaEU, an information and communication technology platform, said Xi's speech sends a clear and firm message that China will continue to support the multilateral system and global cooperation, particularly at a time when the international community is faced with unprecedented uncertainties and risks posed by unilateralism and protectionism.

"China's commitment to openness and cooperation at G20, which was convened following the 2008 financial crisis to jointly work to boost global growth, is of great significance to the world economy, of which China is a driving force," he said.

Statistics show that the country has contributed more than 30 percent of global growth in the past decade.

Gambardella said China's position is very close to Europe's on openness of markets, following World Trade Organization rules, and spurring innovation for growth. "The two sides should work together in these areas and become reliable partners," he said.

David Gosset, founder of the Europe-China Forum, said Xi's speech at the first G20 summit held in Latin America is a clear reaffirmation of China's commitment to inclusive economic development and global stability in a world of unprecedented interdependence.

"In a time marked by fears, irrationalities and confusion, Xi Jinping is rightly calling for a rational approach to solve the issues we collectively face," he said.

Gosset believes China's openness and predictability has become a key stabilizing factor in a world of risks and uncertainties.

The G20 consists of 19 developing and developed countries plus the European Union. Their economies combined account for 86 percent of the world's GDP and 80 percent of global trade. The summit has become a major forum for global economic cooperation.

Rajneesh Bhuee, a consultant economist with Chalkstone Mosaic, a strategic political and social risk management company in Nairobi, the Kenyan capital, said Xi's "insightful and motivating speech" could not have come at a better time.

"As he notes, this is a time for the global community to unite and steer the economy in the right direction and away from headwinds including the anti-globalization wave," she said.

Bhuee said Xi's speech touched on current and much-needed solutions in pushing for global economic growth and positive Sino-African relations that will allow African countries to boost their economic development through implementing projects geared toward sustainable development and innovation.

Andrew Cainey, an associate fellow with the Asia-Pacific program at independent policy institute Chatham House in London, said Xi's speech articulates the leadership role that China is now taking on at a time when the United States is taking a step back.

"I think Xi made constructive comments in underlining support for global governance and adjustments/reform to make global government work better," he said.

Clifford Kiracofe, a former senior staff member with the US Senate Committee on Foreign Relations, said, "In the face of a slowing global economy, the last thing we need is a trade war which hurts China and the US and also the rest of the world."

He said Xi is right to emphasize a global perspective, adding, "The globalization process must be fair to all parties and it must take into account diversity and different models of development."

Julian Beer, a professor and deputy vice-chancellor of Birmingham City University in the United Kingdom, said Xi's speech highlighted that economic, political and social risks were rising globally and he was "so very right to do so".

"We are in one of the most challenging and uncertain times I can remember," Beer said.

Timov Andreev, an international expert with the Valdai International Discussion Club, a Moscow think tank, praised Xi for saying that mutual trust and mutual respect are the most important factors in international relations.

"As the world's second-largest economy, good relations between China and other countries contribute to the stability of the world," he said.

Tang Ying in Nairobi, Ren Qi in Moscow, Wang Mingjie in London, Dong Leshuo in Washington and Chang Jun in San Francisco contributed to this story.