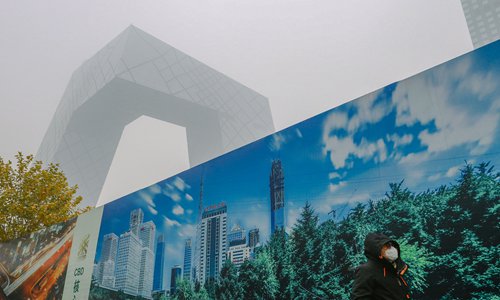 A resident wearing a mask passes by a billboard in front of Central China Television headquarters in Beijing on Wednesday. The capital city issued a yellow smog alert the same day, reminding residents to take precautions. (Photo: Li Hao/GT)

North China experienced its heaviest smog this winter on Wednesday, with the air quality index (AQI) rising over 300 in Beijing, prompting local residents to call the day "poisonous."

The highest density of PM2.5 was recorded at 344 in Beijing on Wednesday. The capital city issued a yellow smog alert the same day, reminding residents to take precautions.

The Ministry of Ecology and Environment (MEE) announced on Wednesday that heavy smog will envelop parts of northern China from Tuesday to Thursday due to poor weather conditions. It also said the air is expected to gradually improve as the smog weakens starting Thursday noon until Friday as a result of a cold front.

Wednesday's smog was the heaviest this winter so far, mainly caused by emissions from factories and diesel-powered vehicles, Wang Gengchen, a research fellow at the Chinese Academy of Sciences' Institute of Atmospheric Physics, told the Global Times.

The condition also sparked concerns about whether efforts to fight pollution have been relaxed due to this year downward economic pressure. Factories which generate pollutants also contribute a large share to the GDP, such as those from energy and construction industries.

The action plan (October 2018 to March 2019) to reduce pollution around the Beijing-Tianjin-Hebei region, released by the MEE in September, set an average density target of PM2.5 of three percent less than the same period last year, and that the number of heavily polluted days should be reduced by three percent.

The action plan for October 2017 to March 2018, however, required that the average density of PM2.5 and polluted days be reduced by 15 percent from the previous year.

"It's a misinterpretation to consider the change a sign of more relaxed efforts to reduce pollution," read a statement the MEE sent to the Global Times on Wednesday.

The air condition to disperse pollutants is worse than last year, as temperatures in the Beijing-Tianjin-Hebei region are 2 C higher than last year and precipitation is also 20 percent less than last year, which made it difficult to achieve the three percent reduction target, the statement said.

The downward economic pressure, challenges from a sluggish international trade environment and trade frictions with the US brought huge pressure to local governments and companies, Lin Boqiang, director of the China Center for Energy Economics Research at Xiamen University, told the Global Times.