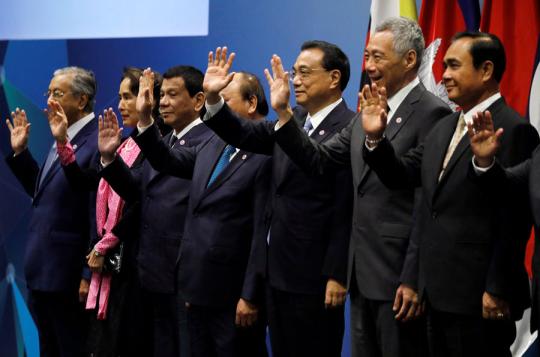 Premier Li Keqiang poses for a group photo with leaders of the Association of Southeast Asian Nations at the ASEAN-China Summit on Wednesday in Singapore. (Photo/Agencies)

China and the Association of Southeast Asian Nations have upgraded the protocol of their free trade agreement to build the largest free trade zone among developing countries.

All domestic approvals for the upgrade were completed by Tuesday, Premier Li Keqiang said at the 21st China-ASEAN leaders' meeting in Singapore on Wednesday.

The FTZ further elevates the trade partnership between China and ASEAN members and sends a clear signal of safeguarding multilateralism and free trade, the premier said.

The event was co-chaired by Li and Singaporean Prime Minister Lee Hsien Loong, and it is one of the annual meetings between the regional bloc and six other major countries.

"We have to tear down unreasonable trade barriers to achieve the goal of $1 trillion in bilateral trade between China and ASEAN, and $150 billion in two-way investment in 2020," Li told leaders of the 10 member states of the regional bloc.

In 2017, China-ASEAN bilateral trade hit $514 billion, representing about 17 percent of the bloc's foreign trade. Li called for a strengthened alignment of the China-proposed Belt and Road Initiative with ASEAN Community Vision 2025, a timely conclusion to negotiations on the Regional Comprehensive Economic Partnership and further cooperation in technological innovation, smart cities and digital tourism.

Lee said ASEAN and China support a rules-based trading system and multilateralism, opening-up and connectivity. Lee said he believes the implementation of the upgraded protocol will further boost two-way trade and investment.

Meanwhile, China and ASEAN members agreed on Wednesday to reach a code of conduct over the South China Sea as soon as possible in order to properly manage differences, expand maritime cooperation and maintain stability.

Li said the two sides have set an example of properly managing differences by fully implementing the Declaration on the Conduct of Parties in the South China Sea to ensure stability in the region. A single draft document for consultation has been reached for the code of conduct negotiations and the first round of reviews will be completed next year, the premier said.

China is willing to work with ASEAN countries to conclude the negotiations within three years and believes countries within the region have the wisdom to ensure peace and stability in the South China Sea, he said.

In the next five years, China will invite 1,000 youths from ASEAN countries for professional training. In addition, China and the bloc will conduct maritime drills and open direct hotlines connecting their defense authorities.

The China-ASEAN Strategic Partnership Vision 2030 was adopted at the meeting, along with a declaration on cooperation in innovation. The two sides agreed to designate next year as the year for media exchanges.