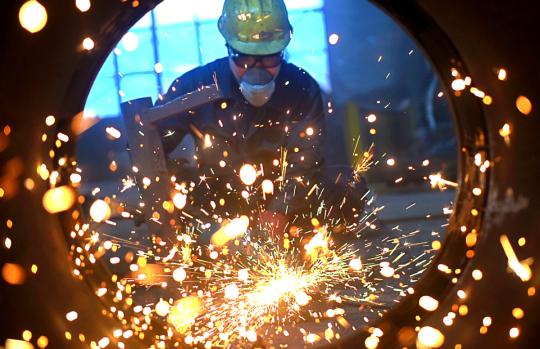 China will continue to reduce taxes and fees, maintaining fiscal expenditure at a relatively high level to back the private sector and stabilize economic growth, Finance Minister Liu Kun wrote in an article published on Monday.

"The Finance Ministry will continually study and implement tax cuts of a larger scale and more significant fee reduction for companies, to better promote the healthy development of the real economy," the minister said in the article in the newspaper Study Times, published by the Party School of the Communist Party of China Central Committee.

All the tax cut and fees reduction policies, planned since the beginning of this year, have been released, said Liu. "Together with a series of measures which debuted in the middle of the year, which aimed to boost the real economy, the whole year's tax and fee reductions are expected to be more than 1.3 trillion yuan ($186 billion)."

China has deepened value-added tax reform this year, including lowering VAT rates for the manufacturing industry and some agricultural products.

Tax policies encouraging innovation were also implemented, including making all enterprises eligible for a higher additional deduction rate of R&D expenditure, which used to apply only to some tech firms.

Tax and fee cuts of more than 1.3 trillion yuan could help the real economy to offset headwinds, while there is still "large room" for a reduction in taxes and fees for enterprises, said Liu Chunsheng, an associate professor at the Central University of Finance and Economics.

"Particularly, to further boost confidence, tax reduction measures that are easy for enterprises to understand and calculate the consequent reduction in costs should be rolled out, such as a decrease in tax rates and an expansion in the types of expenses qualified for deductions," Liu said.

In an interview with China Daily, Wang Jun, director of the State Taxation Administration, said the further measures will focus on VAT and individual income tax reform, in order to stabilize private enterprises' investment and fuel consumption

The plan should be straightforward to implement, and would benefit a broader group of individuals and businesses, said Wang.

Once introduced, the policy would further cut corporations' tax bills, especially for tech startups, and small and microenterprises, he added.

The minister's article also pledged to establish a national financing collateral fund and use it to help 150,000 small businesses get loans of 140 billion yuan per year.

"This new fund could provide financial institutions with high-quality collateral when granting small businesses credits in the short term," said Tang Yao, an associate professor with Guanghua School of Management at Peking University.

To resolve the financing difficulties facing small businesses in the long term, the fund could stipulate that for a small business to get collateral support, it must use fintech software for daily-basis accounting and tax collection, Tang said.

This could improve small businesses' transparency and compliance with regulations, therefore enhancing their access to external financing, he said.

Data from the ministry indicated that in the first nine months, China's total fiscal expenditure was 16.33 trillion yuan, accounting for 77.8 percent of the annual budget. Around 92 percent of the local government bonds' annual issuance quota has been taken up by the end of September. And it was 92.4 percent for the issuance of special-purposed local government bonds.

In order to support expenditure on local infrastructure construction, the central government has invested 409.4 billion yuan in the first three quarters, or 94.2 percent of the annual budget, mainly supporting projects in the fields of innovation and environmental protection, said the article.