Women urged to contribute to reform on front line 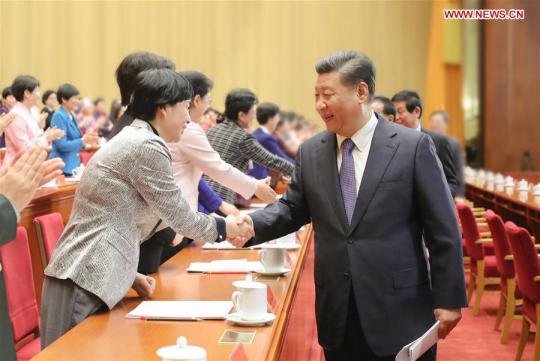 President Xi Jinping urged Chinese women on Friday to play a positive role in all sectors and make contributions to the country's reform, development and stability on the front line.

Xi, also general secretary of the Communist Party of China Central Committee and chairman of the Central Military Commission, made the remarks when meeting in Beijing with members of the newly elected leadership of the All-China Women's Federation.

Xi said the CPC Central Committee fully affirmed the work over the past five years of the women's federation, which has promoted the country's work of women's development to achieve historic accomplishments.

Work of women's development concerns the solidarity and cohesion of roughly half of the country's population, Xi said, and it also concerns whether great strength can be provided for developing the cause of the Party and the people.

Xi said the women's federation should dedicate itself to representing and maintaining women's rights and interests and promoting gender equality, as well as women's development in all respects.

Extra care should be put on women suffering poverty, women with disabilities and those who remain in rural areas to handle family matters when husbands go to cities to work, to help them solve problems and difficulties, he said.

Xi also said the basic national policy of gender equality should be adhered to, and the legitimate rights and interests of women and children should be protected.

Given that discrimination against women still exists, Xi said, criminal acts that violate women's rights and interests should be cracked down on in accordance with law.

The 12th National Women's Congress closed in Beijing on Friday, and Shen Yueyue was re-elected president of the All-China Women's Federation on Thursday.

Wang Weiguo, director of the publicity department of the women's federation, said at a conference earlier this week that progress has been made in eliminating educational obstacles for female students and in expanding the employment market for women.

Nearly 2.83 million women have received a total of 189 billion yuan ($27.5 billion) in interest-free small loans in the past five years, which has helped them start their own businesses and increase their incomes, according to the federation.