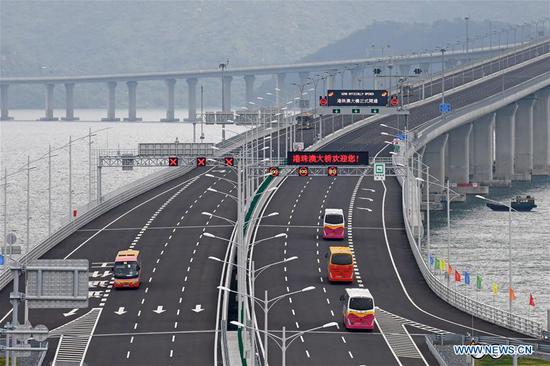 After nine years of construction, the world's longest bridge, the Hong Kong-Zhuhai-Macao Bridge, has opened to traffic, giving a strong boost to the development of the Guangdong-Hong Kong-Macao Greater Bay Area.

The 55-km bridge, situated in the waters of Lingdingyang of Pearl River Estuary, connects the Hong Kong Special Administrative Region (SAR), Zhuhai and the Macao SAR. The bridge is the first of its kind for Guangdong, Hong Kong, and Macao to jointly build a supergiant sea-crossing traffic project under the principle of "one country, two systems."

Loaded with travellers from Hong Kong, Zhuhai and Macao, hundreds of buses traveled on the mega bridge Wednesday, the first day of its traffic operation.

Before arriving at destinations on the three ends of the bridge, the buses passed through four artificial islands in the sea as well as the deep tunnel which had been built to allow heavy-duty vessels to sail in and out of the Pearl River Delta, one of the world's busiest manufacturing centers.

"It used to take more than four hours to go to Zhuhai on wheels, but now it is just half an hour's drive on the bridge!" said a driver surnamed Yu who works for a Hong Kong travel agency and has shuttled passengers between Hong Kong and Guangdong for more than seven years.

"Taking a bus through the bridge is a more convenient and faster new way than taking a shuttle ship from Macao to Hong Kong," said a Macao resident surnamed Yuen who took Wednesday's first Macao-Hong Kong shuttle bus on the bridge with her sister.

Meanwhile, the first trailer truck carrying a jet engine from Hong Kong also arrived in Zhuhai via the bridge on Wednesday. Compared with the route across the Humen Pearl River Bridge, the mega cross-sea bridge allows container trucks to save a lot of time while shuttling between Guangdong and the Hong Kong International Airport, the world's largest one in terms of annual cargo capacities.

The idea to build the bridge was initially proposed by a Hong Kong businessman.

Gordon Ying Sheung Wu, 83, who had a tour on the bridge on Wednesday, told Xinhua that he was very glad to be finally able to walk on the bridge he had dreamed of for nearly 40 years.

In 1983, Wu proposed to build a cross-sea bridge over the Lingdingyang Channel, a more efficient route linking Hong Kong and the western parts in Guangdong Province.

But the then British Hong Kong government was indifferent to Wu's ambitious idea.

After Hong Kong returned to the motherland in 1997, the Hong Kong SAR government actively promoted the idea and officially submitted its plan to build the bridge to the central government.

During the construction of the bridge, builders faced difficulties which had never been met by previous engineers. Some foreign companies even asserted that Chinese builders could never succeed in the bridge's underwater tunnel project.

Lin Ming, chief engineer of the bridge's tunnel project, said, "It has been my proudest achievement to lead the Chinese team to tackle the world-class engineering difficulties in building the bridge with our own wisdom."

Only with support and coordination of the central government can such a mega project be finished, said Michael C. Y. Cheung, executive director of Zhen Hua Engineering Company which had taken part in the construction of the bridge's Hong Kong section.

The mega bridge will not only remarkably shorten travel distance between Hong Kong and Macao and cities on the west bank of the Pearl River, but also increase opportunities for various industries in the greater bay area to integrate resources for a synergistic effect, said Joe Fang, research director of Hong Kong-based "One Country, Two Systems" Research Institute.

"The bridge has created a great room for us to imagine the prospect of integrated development of cities in the Guangdong-Hong Kong-Macao Greater Bay Area," he said. Enditem