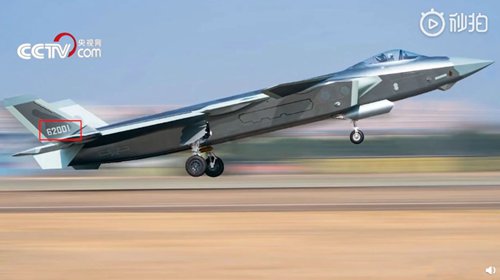 A photo released by the People's Liberation Army Air Force on Wednesday shows for the first time what reports said to be a J-20 affiliated with a combat unit, suggesting that the aircraft has graduated from a trial unit and is ready for active duty. (Photo/screenshot from cctv.com)

The Chinese People's Liberation Army (PLA) Air Force for the first time released a photo of a J-20 stealth fighter jet showing the serial number of a combat unit, indicating that the warplane has ended trials and become a potent warplane protecting the country.

A photo with the caption "An Air Force J-20 fighter conducts real combat training" was released by the PLA Air Force on Wednesday, along with a statement introducing its increasing strategic capability.

Although the warplane has been seen in previously published photos and videos, Wednesday's photo attracted attention as it showed a J-20 with the tail number 62001.

This is the first time a J-20 has been seen with tail number beginning with a "6," Weihutang, a program on military affairs affiliated with China Central Television, reported on Friday, noting that the numbers on previously seen J-20s began with a "7."

According to PLA Air Force's tradition, numbers starting with "7" indicate aircraft attached to a trial unit, while the "6" indicates the J-20 is affiliated with a combat unit under the PLA Eastern Theater Command, said Ordnance Industry Science Technology, a Xi'an-based periodical on the national defense industry, in an article published on its WeChat account on Friday.

This suggests that the J-20 is already on combat duty, becoming an important new force in safeguarding China's skies, the magazine said.

In February 2018, the PLA Air Force announced the J-20 has been commissioned into its combat troops, but a photo of it had not been released until now.

The release of the photo of a J-20 with a "6" on its tail also indicates combat troops have mastered the fighter jet, Chinese analysts said.

Fu Qianshao, a Chinese air defense expert, told the Global Times on Sunday that training under a combat unit is different than under a trial unit.

While exploring specific capabilities is likely emphasized in trial unit training, the focus of training under a combat unit includes tactical practice, Fu said, noting that a training syllabus and a maintenance manual have also likely been completed for the aircraft.

Fu believes that the J-20 is now more sophisticated than US' F-35.

The J-20 is listed in China's latest national defense white paper as one of the new, high-tech weapons the Chinese military has commissioned.

Fu said that the aircraft will be mass produced and further enhanced in the future. Its engines, aerodynamic design, weapons and electronics systems including radar, avionics and flight control system could be upgraded, he said.

The public might get to see the J-20 in flight if it makes a flyby over Tiananmen Square in Beijing during an expected parade to celebrate the 70th anniversary of the founding of the People's Republic's on October 1, analysts predicted.