Comicomment: What's behind the rampant gun violence in U.S.? 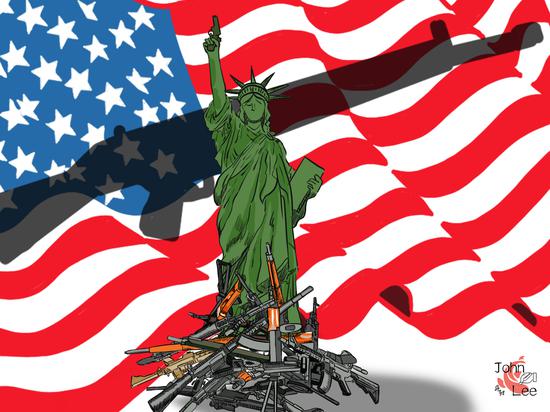 A gunman killed at least 19 children and two adults on Tuesday in a Texas elementary school. This outrageous school shooting was reportedly the deadliest in the US since a decade ago, according to U.S .media. It is saddening and disturbing that many children have fallen victim to shootings on campus due to the proliferation of guns in the U.S.

Some U.S. media commented that gun violence is a pandemic of the US society that leaves the American people in despair. With 4.2% of the world’s population, the U.S. has 46% of the world's civilian-owned guns, or 393 million. However, no substantive measures have been taken by the U.S. government to tackle these problems over the past decades. Over the past 25 years, the U.S. federal government has failed to promulgate a single gun control act.

Pro-gun interest groups provide generous political donations for elections and manipulate policies by influencing politicians through lobbying activities. This is why various U.S. administrations failed to honor their gun control commitment and many gun control bills eventually fell apart. What the U.S. should do is earnestly face up to and address the serious flaws in its system and human rights issues so that the American people can truly live free from the fear of gun violence.