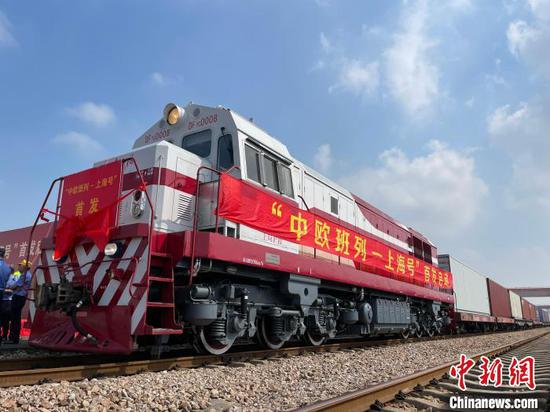 The express loaded with more than 50 containers full of clothing, auto parts, glass vessels, equipment and other goods will leave Shanghai via Alashankou in Xinjiang Uyghur Autonomous Region and Małaszewicze in Poland, to finally arrive in Hamburg, Germany.

The initiation of Shanghai Express will provide more options for foreign trade companies when facing difficulties under increasing commercial trade for 15 consecutive months, according to You Yongsheng, an official of the Shanghai Municipal Commission of Commerce.

"Shanghai Express can save both the time and cost of transportation," said Wang Jinqiu, president of China Railway Express.

"It also presents a new way to export our goods to Europe and countries and regions along the Belt and Road Initiative," he added.

The train will run regularly every week. To build an efficient and convenient channel for international trade, 500 expresses will be running from Shanghai each year in the future, You said.