Is the U.S. sharing its vaccines or clinging to hegemony? 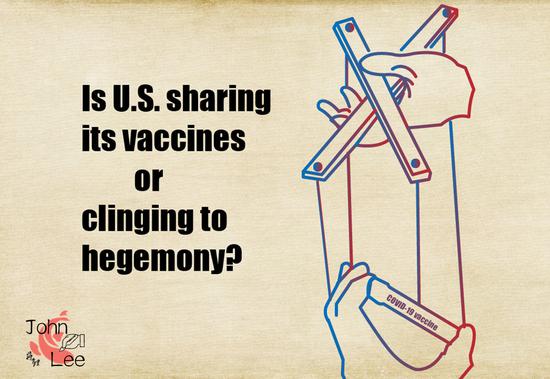 Is U.S. sharing its vaccines or clinging to hegemony? (Pic by Yao Lan)

(ECNS)-- Ben Sasse, a U.S. senator from Nebraska, suggested in the Wall Street Journal that the American government should expand global vaccine assistance and set a goal of inoculating more than one billion people around the world by Thanksgiving, claiming it is "a genuine once-in-a-generation opportunity to show the world what U.S. leadership looks like.”

The world is facing a severe shortage of COVID-19 vaccines, but what the senator wants the world to see is what U.S. leadership looks like. He even suggested that “every person who accepts an American vaccine should know exactly where it came from.”

That reminds us of the familiar smell of “American hypocrisy.” Is the U.S. putting on a political show?

So far, the White House hasn’t decided how the new commitment of vaccines will be shared or which countries will receive them, according to the Associated Press. “As U.S. races back to ‘normal’, no signs it is letting go of vaccine stockpile”, an article released by the Times of India. Will the U.S. pledge become an empty promise?

To Sasse, there are "imaginary enemies" and what he proposed is nothing but a “vaccine race”.

The vaccine should not be a tool to create "vaccine divide" or seek political manipulation. Rather than a calculated publicity build-up by taking advantage of vaccines, the U.S. should take concrete measures. Playing the card of geopolitical intrigue is doomed to fail.