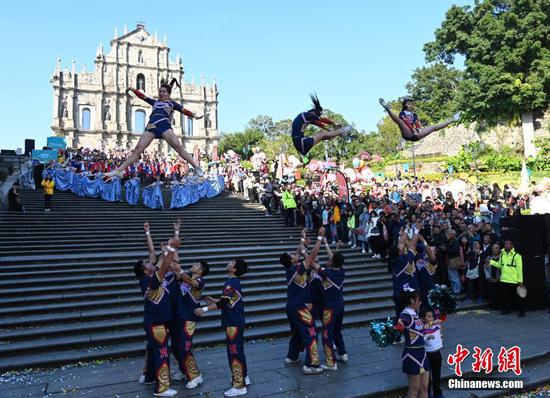 Performers take part in the Macao International Parade in Macao, south China, Dec. 8, 2019. The parade was held to celebrate the 20th anniversary of Macao's return to the motherland. (Photo/China News Service)

(ECNS) -- The 2019 Macao international parade kicked off in front of the Ruins of St. Paul's on Sunday.

It was organized by the Culture Bureau of the Macao Special Administrative Region government to celebrate the 20th anniversary of its return to the motherland.

Eighty teams from countries and regions along the Belt and Road Initiative route participated in the event, with nearly 1,800 artists dressed in a variety of styles making their debut.

Mu Xinxin, director of the Culture Bureau of Macao, said about 150,000 people attended the parade this year, a big increase from previous times.

More cultural elements related to the Greater Bay Area will be added in future, with activities to incorporate the entire region soon.