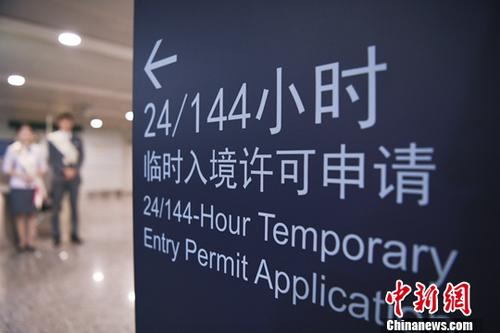 A notice board at the Guangzhou Baiyun International Airport. (File photo/China News Service)

(ECNS) -- Southwest China's Chongqing Municipality, along with the cities of Xi'an in Shaanxi Province and Ningbo in Zhejiang Province, is among the new regions to launch the 144-hour visa-free transit policy, according to the National Immigration Administration.

The policy applies to passengers from 53 countries including Britain, the United States, Australia, Japan, Denmark, France, Germany and Russia. Travelers are required to carry valid international travel documents and onward travel tickets with confirmed dates and seats within 144 hours.

The policy has also expanded to Chengdu of Sichuan Province to cover 11 cities.

One notable development is that Jiangsu and Zhejiang provinces and Shanghai, the three economic powerhouses of eastern China, have unified the visa-free policy. This means that passengers can arrive in the country via the airport in Ningbo and exit through any port in the three regions, significantly expanding travel choices.

Data showed from January 2013 to September that more than 452,000 foreigners benefited from the 144-hour visa-free policy.