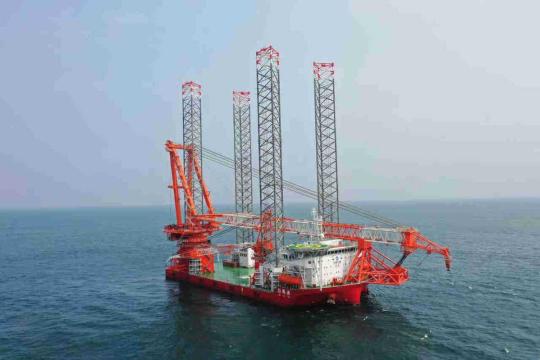 China's first 2,000-metric-ton offshore wind-power installation platform was delivered for use in the Nansha district of Guangzhou, Guangdong province, on Wednesday, deepening the potential of offshore wind power in the country.

The platform, named Baihetan, is the first offshore wind-power installation platform that meets the fourth-generation standards of offshore wind equipment in China and the requirements of integrated construction operations, including self-lifting and self-navigation in deep waters, according to a statement released by Huangpu Wenchong Shipbuilding, a subsidiary of China State Shipbuilding Corp.

"Its lifting capacity, depth of operating water and the deck area all come first in the industry," he said.

Baihetan stands on four legs up to 120 meters long — equivalent to a 40-story building.

It can float on the sea surface while slowly inserting its four legs into the seabed, passing through the mud to reach a hard layer.

It then lifts itself above the sea surface to allow the offshore wind-power equipment to be assembled on the platform, greatly reducing the difficulty of installation.

"Through the application of a series of domestic high-tech equipment and technologies, the platform can also achieve stability and safety of operations in complex operating environments, including strong wind and high waves, greatly improving the safety, economy and convenience of offshore construction in deep waters," said Zhao.

Baihetan is 126 meters long and 50 meters wide, and is designed to operate in depths of 70 meters. The lifting capacity of the main crane is 2,000 tons, while the auxiliary crane can lift 200 tons.

It is leading-edge equipment for the development of wind operations in deep waters, the statement said.

Baihetan uses a full electric drive and a full propeller propulsion mode that can achieve low-carbon operation, it said.

Baihetan will mainly be used in the waters of Fujian and Guangdong provinces in the coming months, it said.