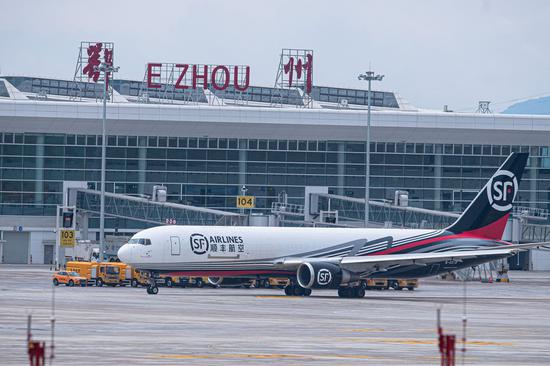 Located in the city of Ezhou, it is also the first professional cargo hub airport in Asia and the fourth of its kind in the world.

The new airport, equipped with a cargo terminal of 23,000 square meters, a freight transit center of nearly 700,000 square meters, 124 parking stands and two runways, is expected to improve the transport efficiency of air freight and further promote the country's opening up.

The operation of Ezhou Huahu Airport conforms to the needs of China's development, said Su Xiaoyan, senior director of the airport's planning and development department.

The number of parcels handled by China's courier companies hit a record high of over 108 billion last year, and is expected to maintain stable growth in 2022, according to the State Post Bureau.

The functions of the Ezhou airport are benchmarked against the Memphis International Airport in the United States, one of the world's busiest cargo airports.

SF Express, China's leading logistics service provider, plays a crucial role at the Ezhou airport, much like how FedEx Express handles the majority of cargo at the Memphis International Airport.

SF Express holds a 46 percent stake in Hubei International Logistics Airport Co., Ltd., the operator of Ezhou Huahu Airport. The logistics service provider has independently built a freight transport transit center, a cargo sorting center and an aviation base at the new airport. SF Express also plans to process the majority of its packages through the new airport in the future.

"No matter where the destination is, all SF Airlines cargoes can be transferred and sorted in Ezhou before being flown to other cities in China," Pan said, adding that such a transportation network will enable SF Express freight planes to operate at full capacity, hence improving transportation efficiency.

The landlocked city of Ezhou is hundreds of kilometers away from any seaports. But with the new airport, goods from Ezhou can reach anywhere in China overnight and overseas destinations in two days.

"The airport will promote the opening up of the central Chinese region and the whole country," said Yin Junwu, director of Ezhou Airport Economic Zone Management Committee, adding that airline and shipping companies from the United States, Germany, France and Russia have already reached out to forge cooperation with the airport.

The airport has opened two cargo routes to Shenzhen and Shanghai, and is scheduled to add international routes connecting with Osaka in Japan and Frankfurt in Germany within this year.

The airport is expected to open around 10 international cargo routes and 50 domestic routes by 2025, with the cargo and mail throughput reaching 2.45 million tonnes.

Being the only professional cargo hub airport in China, Ezhou Huahu Airport has made breakthroughs in digitalization and intelligent operation. Builders of the project have applied for more than 70 patents and copyrights for new technologies, such as 5G, big data, cloud computing and artificial intelligence, for making the new airport safer, greener and smarter.

For instance, there are more than 50,000 sensors beneath the runway for capturing the vibration waveform generated by aircraft taxiing and monitoring runway incursion.

As it's a cargo hub airport, freight planes mainly take off and land at night. To save human labor and ensure airport safety and efficiency, airport operators hope that more machines can be deployed to substitute humans for nighttime work.

"We've spent nearly a year testing unmanned vehicles in designated areas on the apron, aiming to build an unmanned apron in the future," Pan said.